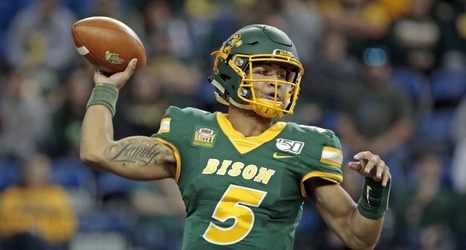 Trey Lance is the most under the radar prospect in the NCAA.  Many fans know about Trevor Lawrence and Justin Fields but is the best quarterback in the NCAA from North Dakota State?

The first thing you are going to say is Level of Competition, I get it!

Can you explain this though?

Last season, Lance threw for 2,786 yards with 28 touchdowns and zero interceptions, leading the Bison to the national championship. DID YOU READ THAT? ZERO PICKS, that is insane for any level.

“At 6-foot-3 and 221 pounds, Lance has physicality and good mobility, and plenty of NFL folks have already taken notice. The question is how his skill set translates to a higher level of competition. He has never thrown a pass against an FBS foe, and his playoff numbers — 60% completion rate with five passing TDs over four games — didn’t exactly match his regular-season production. Lance, who will be a third-year sophomore, is a wild card, but the upside is tremendous.”

Lance a Marshall, Minnesota native as redshirt freshman, started all 16 games guiding the Bisons to a 16-0 finish. It is the first of its kind in college football since 1894. Along the way he became the first freshman to win the STATS FCS Walter Payton Award as the top offensive player in the FCS.

Lance led the FCS with a school record 180.6 pass efficiency rating, ranked second in yards per pass attempt(9.71) and fifth in completing percentage(66.9).

Check out our Scouting Notes on Trey Lance:

Only nine quarterbacks have been drafted this past decade from a small school, and two of them came from North Dakota State. Both Carson Wentz and Easton Stick were both drafted, and I expect Lance to be next. Lance has poise, he is mature beyong his age, and the kid is a gamer. Trey Lance is a proven winner and he knows how to distribute the ball all over the field.  Lance will be in the NFL, if he decides to declare early I cannot knock him. – Damond Talbot, Owner, NFL Draft Diamonds