Ranking the top 5 quarterbacks in the 2021 NFL Draft 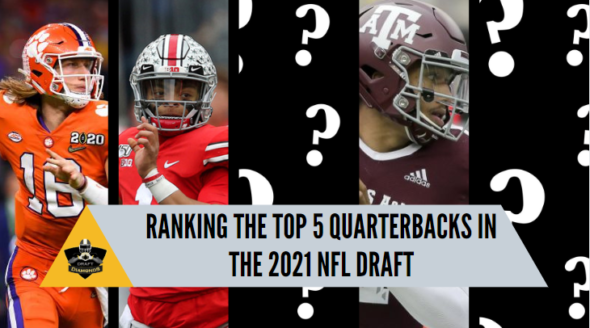 The 2021 NFL Draft is going to be here before we know it. Ok, maybe we are just excited about football, but we love the NFL and miss it.

As the owner of NFL Draft Diamonds I have been breaking down film of the FCS players all year, but took a little break to watch some FBS prospects.  I think this is important because it maybe the best quarterback class in a long time.  So I wanted to take a second and break down my top five quarterbacks eligible for the 2021 NFL Draft. Let’s have a look!

1. Trevor Lawrence, Clemson – The kid is huge. He stands at 6060, and has a wide receiver frame weighing 220 pounds.  He can stand in the pocket, and we learned last year he is faster than we expected too.  Lawrence has thrown for 66 touchdowns over the past two seasons, and rushed for 10 scores.  We have heard “Tank for Trevor” and this could be the term like “Suck for Luck” because he is pretty damn talented.

2. Justin Fields, Ohio State – This is the one quarterback I would not be surprised taken before Lawrence. I think Fields has something that NFL teams are going to love. Both he and Lawrence are studs with big arms, and they have been competing since high school.  Fields finished as a finalist for the Heisman last season after throwing 41 touchdowns and just three interceptions.  The crazy thing is he can run too, like Lawrence.  We could see two quarterbacks taken 1 and 2.

3. Trey Lance, North Dakota State – WHO? You better start taking notes folks.  Trey Lance is the real deal.  He has only one year under his belt as a redshirt Sophomore this season, but he was the Jerry Rice winner for Freshman of the Year in the FCS and won Offensive Player of the Year. Add in the fact that he won the National Championship and went undefeated.  He is a 6030 gunslinger with 28 touchdowns and get this ZERO INTERCEPTIONS.  If he leaves he has my blessing.

4. Kellen Mond, Texas A&M – I think Mond has been terrific for the Aggies.  He has started since his Freshman year and thrown 52 touchdowns.  Unfortunately, he has also thrown 24 interceptions, but the 6030, 217 pound signal caller can make every NFL throw.  He reminds me a lot of Jordan Love, who went in the first round of the 2020 NFL Draft.

5a and 5b. Jamie Newman, Georgia and Sam Ehlinger, Texas – I had to have two at number 5 because I loved the film from both of these guys.  Newman is a dual-threat quarterback that I really think will have a huge year in 2020.  He is a grad transfer from Wake Forest who will play under a former NFL offensive coordinator this year at Georgia. When it comes to Sam Ehlinger, his accuracy has improved every year.  He is getting better and better for the Longhorns.  He is a 6030 and 230 pounds, and is not afraid of throwing the rock. He has 68 passing touchdowns in his career.