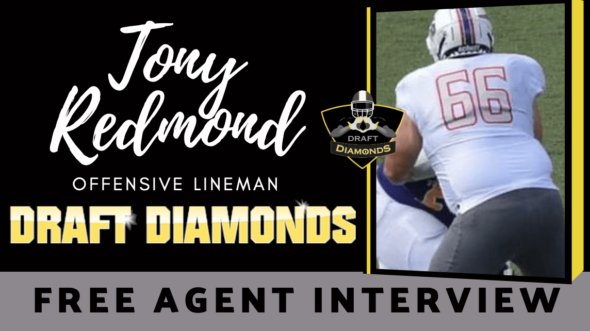 Hello, I am @jrberendzen on Twitter and this is one of my free agent interviews where I ask very deserving free agents questions about the players themselves and about what a team would get in these players. All of these players should get picked up by NFL and CFL teams and get a shot at being a career football player. So I hope you all read this interview and follow Tony’s journey. Make sure you follow him on Twitter at @BigRed_995

1. What is your favorite dinner?

My favorite dinner is a ribeye cooked to medium rare with garlic mashed potatoes and steamed broccoli.

2. If you were on a game show and won 100 thousand dollars what would you do with it?

The first thing I would do is pay off student loans. Then, I would buy a new car, but nothing too flashy. Then I would build a home gym, and invest whatever is left.

3. What is your mindset when you are on the football field?

I want to dominate the guy across from me every single play. I don’t want them to win a single rep

4. If you could spend a day with any football player past or present who and why?

Larry Allen. He was one of the greatest offensive linemen ever, so I think it would be amazing if I could pick his brain and get some wisdom from one of the best to ever do it.

5. Who do you model your game after?

I try to model my game after Shaq Mason of the New England Patriots. He’s a dominant run blocker who’s also good blocking at the second level.

That depends on what type of island it is. If it’s somewhere like Aruba then sunglasses, sunscreen, and a bottle of rum. If it’s a deserted island then I would bring a knife, a canteen, and some flint.

8. What made you decide you wanted to play football?

I remember watching football growing up and thinking how cool it was so when I had the chance to play it was a no brainer.

9. If you could live anywhere in the world where and why?

Houston, Texas. It’d be cool to go travel the world, but you cannot beat home.

They would get a player who has his best football ahead of him. Someone with big upside who will do everything it takes to win.

11. Who is your favorite musical artist?

That’s a tough one. I listen to just about every type of music so you could ask me that question ten times and I’ll give you ten different answers

12. If you were an animal which animal would you be and why?

I would say a lion. Lions are the kings of the savanna, and no one messes with them. It has great strength and never backs down from a fight.