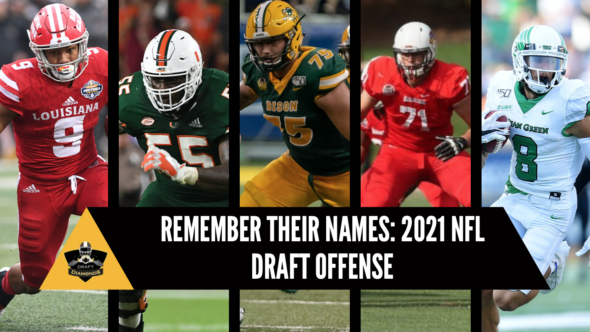 Craig Forrestal of NFL Draft Diamonds breaks down a list of defenders he wants you to remember, in his latest Remember their names series

Here is an early look into the 2021 NFL Draft Class with some names to remember on the offensive side of the ball. While some players on the list will be more well known than others do not let that discourage you from remembering their name. There is legitimate talent on this list and it will be on the minds and eyes of scouts everywhere this fall. So here is the first look at some names to remember for the 2021 NFL Draft

Listed at 6ft3/201 on the school website. Crum completed 217 passes for 2625 yards and 20 touchdowns against just 2 interceptions in 2019. Additionally, he added 707 rushing yards and 6 touchdowns. Crum had his breakout performance against Utah State in last year’s bowl game where he was named Offensive MVP of the Tropical Smoothie Cafe Frisco Bowl. This was the Flashes’ first-ever bowl win as Crum tallied 289 yards passing, 1 TD passing, 147 yards rushing and 1 TD rushing.

Listed at 5ft10/218 on the school website. Ragas is a 3x All-Conference back heading into his senior season. Ragas is the all-time leading rusher in Archbishop Shaw’s illustrious prep history in the New Orleans area. Both Raymond Calais, a 2020 NFL Draft Pick by the Buccaneers, and Elijah Mitchell shared the backfield with Ragas. His production never slowed down though. He enters his final season with 2814 career rushing yards and 28 rushing TDs.

Listed at 5ft10/225 on the school website. Hardy is a Division 2 standout with a running style that combines quickness and a powerful presence behind his pads. Hardy burst onto the scene with a beautiful 2017 season logging in 207 carries, 1077 yards, and 8 touchdowns. He missed the 2018 season due to injury but rebounded with a magical run in 2019 registering 204 carries, 1554 yards and 15 TDs. 2017 2nd Team All-Great Lakes Intercollegiate Athletic Conference and 2019 Great Midwest Athletic Conference Player of the Year and American Football Coaches Association 2nd Team All American selection. Tiffin moved from the GLIAC to the GMAC in 2018.

? #GreatMidwest Player of the Year

Listed at 6ft2/193 on the North Texas website. He had a strong connection with former North Texas QB Mason Fine. He leaves North Texas having played 34 career games totaling 128 catches for 1941 yards and 21 TDs. 2018 1st Team All-Conference USA but had his 2019 season cut short due to injury. He is an excellent route runner that finds the cracks in the zone that teams will throw at him. Rumored landing spots include Nebraska, Miami (FL), and Virginia Tech as they have expressed interest in adding WR depth; regardless he seems destined for a Power 5 conference.

Listed at 6ft3/197 on the school website. Another year another Memphis skill player. Coxie took a redshirt year in 2016 and was named Offensive Scout Team Player of the Year. 2018 and 2019 2nd Team All-American Athletic Conference. 41 career games with 169 catches for 2773 yards and 19 TDs. According to his 247 Sports recruiting profile he had SEC offers from LSU, Alabama, and Florida but a track related injury scared some schools off resulting in Coxie landing with the Memphis Tigers. Coxie is one of the better blocking WRs you will find in the 2021 class.

Listed at 6ft3/190 on the school website. In 2019 Toure was named an FCS All-American after posting 87 catches, 1495 yards, and 13 TDs. Toure has tallied 155 catches, 2488 yards and 20 TDs for his career entering his final season. He broke a record previously held by Randy Moss after posting 303 yards against SE Louisiana in the playoffs for receiving yards in a single playoff game. Toure tracks the ball well and has enough burst, explosion, and speed to pose a threat to the defense once the ball is in his hands.

Listed at 6ft7/245 on the school website. Davidson doubles as the P and in 2019 averaged 40.3 yards per punt and for his career holds a 42.4 yards per punt average. He has tremendous size for the TE position. As a TE in 2019, he posted 40 catches for 894 yards and 15 TDs. When watching small-school prospects you want them to jump out at you, and Davidson certainly does that. He has unparalleled athleticism as he is used on designed runs from the “TE” position. He has good vision with the ball in his hands and accelerates away from DBs on film.

Listed at 6ft10/315 on the school website. 3-year starter at LT for the Redbirds entering his senior season. Himmelman has earned 2 selections to the All-Missouri Valley Football Conference Team and in 2019 was recognized as an FCS All-American. Himmelman had to decide between basketball and football coming out of high school. He held an offer from Northern Illinois to play basketball, while Iowa offered a walk-on spot for football. Illinois State was his only football offer. He was a TE in high school.

Listed at 6f6/301 on the school website. Radunz earned All-Missouri Valley Football Conference selections in 2018 and 2019 along with being named an FCS All-American in 2019. Radunz has good size and athletic ability as he shows that he can get outside and lead the way/find somebody. He enters his senior year already having started 30+ games. At times he dominated a tough and talented Montana State DL in the 2019 FCS Semis.

Listed at 6ft6/363 on the school website. Donaldson has started 34 games entering his senior season. Donaldson has started games at RT, RG, and LG for the Hurricanes. He played in the 2017 Under Armour All-America Game and was a Top 100 National Recruit by all major recruiting services. Good strength and good length; if he gets ahold of you he doesn’t let go.

Listed at 6ft5/345 on the school website. Reese is taking courses towards becoming a doctor at Mississippi State. His brother is a linebacker for the Florida Gators. He has started 34 games entering his senior season. Reese has started at RT and RG for the Bulldogs. Comfortable in pass protection at OT. Reese establishes good, initial contact on run plays and turns his man away from the action.

Interception that is returned until Stewart Reese almost kills the returner, forces a fumble, which @73_darryl recovers and earns a first down. pic.twitter.com/A6SyQMy5XQ