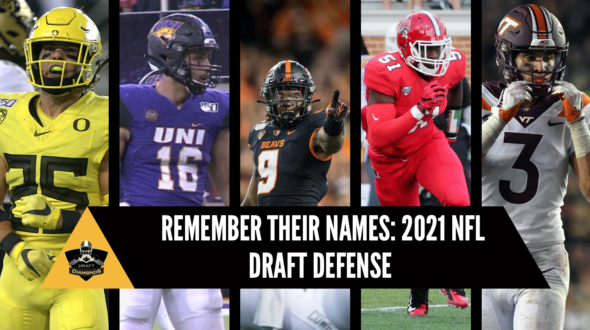 Craig Forrestal of NFL Draft Diamonds breaks down a list of defenders he wants you to remember, in his latest Remember their names series

Here is an early look into the 2021 NFL Draft Class with Craig Forrestal’s Remember their Names section on the defensive side of the ball. While some players on the list will be more well known than others do not let that discourage you from remembering their name. There is legitimate talent on this list and it will be on the minds and eyes of scouts everywhere this fall. So here is the first look at some names to remember for the 2021 NFL Draft

Listed at 6ft5/275 on the school website. Basham Jr. earned 1st Team All-ACC Honors in 2019. He enters his senior season with 31 career tackles for loss and 15.5 career sacks. Once he beats the OT he gets to the football; he is not the fastest player but plays with an eagerness and long strides. Some believed Basham Jr., was going to enter the 2020 NFL Draft but he returned for a potentially explosive senior season.

Listed at 6ft7/245 on the school website. Smith saw his first significant action in 2018 when he posted 7.5 sacks. Then Smith followed it up with an unreal 2019 where he put up video game numbers including 63 tackles, 21.5 tackles for loss, and 14 sacks. He was a multi-sport athlete in high school. Smith possesses a unique combination of size and athleticism that is should continue to blossom in 2020.

Listed at 6ft2/290 on the school website. Twyman returned to school for the 2020 season after flirting with the idea of declaring for the NFL Draft. Since he has arrived on campus there have been whispers of and comparisons to Aaron Donald. Twyman started 13 games in 2019 with 10.5 sacks and 12 tackles for loss en route to an All-American season where he also added 1st Team All-ACC Honors. He is the first interior DL to lead the Panthers in sacks since Aaron Donald. Twyman is more than a pass-rushing DT as he holds his own in the run game. Twyman is an all-around and complete DT prospect.

Pitt IDL Jaylen Twyman is legit. His hands are really, really good. This is a really nice swim move to get this sack here on Clifford. He has the potential to be a 1st round pick in the 2021 draft. pic.twitter.com/Gum3it5ted

Listed at 6ft2/234 on the school website. Albright offers the ability to play as an ILB in a 3-4 alignment or as an OLB in a 4-3 system. He shows strong fundamentals and flashes his athletic ability in pursuit on numerous occasions. Albright led the team in 2018 in sacks with 5.5 and forced fumbles with 4 while recording 8 tackles for loss and 67 total tackles. In 2019 he recorded 71 total tackles, 10.5 tackles for loss, 5 QB hurries and 2 forced fumbles.

Listed at 6ft4/238 on the school website. 2019 1st Team All-American and 1st Team All-Pac 12. Rashed will enter the 2020 season with 21 career starts. In 2019, he led the nation with an Oregon State single-season record 22.5 tackles for loss and 14 sacks with 62 total tackles. He fits best in a 3-4 scheme in the NFL. Rashed returned for his senior season in what should be a season to rewrite the Oregon State record books.

Ball received Honorable Mention All-Big 10 Awards in 2016 and 2018. Ball will leave as a 4-year starter. Has played the Husky position for Indiana and their 4-2-5 base defense. The Husky position is a hybrid LB/S. Ball comes from a football family: Marcus, brother, and former NFL DB; Reggie, brother, and former Georgia Tech QB and NFL WR; and Raeshon, brother and former UT-Chattanooga DB. Ball is a tough tackler with room to grow in coverage but plays with a passion that few can match.

LIsted at 6ft2/207 on the school website. Farley has terrific size and does possess playmaking skills. 2018 was his first season playing exclusively as a DB as he was an offensive superstar in high school accounting for 58 TDs as a senior. He was a 2nd Team All-State QB behind current Virginia Tech teammate Hendon Hooker. Farley was a 1st Team All-ACC selection in 2019 as a CB and totaled 16 passes defended and 4 INTs with 1 INT returned for a TD. He has 6 INT and 19 pass breakups for his career.

Listed at 5ft11/203 on the school website. Lenoir was an All-Pac 12 player in 2019 starting all 14 games and he added 13 more starts in 2018. Entering his senior season Lenoir has played in 40 games recording 5 INT and 26 PD and 124 tackles. Lenoir is a plus tackler with sound technique and is solid in press coverage having played a considerable amount of snaps on the boundary.

Listed at 6ft/198 on the school website. Breeze had 3 defensive TDs in 2019. He was a 1st Team All-Pac 12 selection on Special Teams in 2019. Breeze was responsible for 20 tackles, including 15 solo, two pass breakups, an interception, a forced fumble and a fumble recovery for TD in the Rose Bowl and Pac-12 Championship Game. Rose Bowl Defensive MVP. In 2019, Breeze had 62 tackles, 4 fumble recoveries, 1 forced fumble, and 2 INT.

Listed at 6ft/203 on the school website. Easterling returned an INT 100-yards for a TD against Drake. On this play, Easterling makes a nice play on the ball and then gets his eyes upfield immediately to find the running lanes zigging and zagging his way to daylight around midfield. Easterling logged 140 tackles, 6 INT, 4 pass breakups, 3 forced fumbles, and 3.5 tackles for loss in 2019.

He was a 1st Team FCS All-American and 1st Team All-Pioneer Football League in 2019. Easterling finished 8th for the Buck Buchanan Award which goes to the top defensive player in FCS football in 2019. He shows the ability to find the football and create turnovers via interception or vicious hits causing fumbles.

Listed at 5ft11/163 on the school website. Jackson started 8 games in the nickel spot in 2018. Jackson had 47 tackles, 8 tackles for loss, 2 sacks, 2 forced fumbles, 2 fumble recoveries, 7 INT and 3 QB hurries in 2019. 1st Team All-Ohio Valley Conference in 2019. Jackson plays bigger than his weight indicates as he is willing to play in bump-and-run scenarios. Jackson finished in 6th for the Buck Buchanan Award in 2019. Jackson recorded stats in a bunch of categories which means he is a playmaker and that is shown through his 3 TDs in 2019.