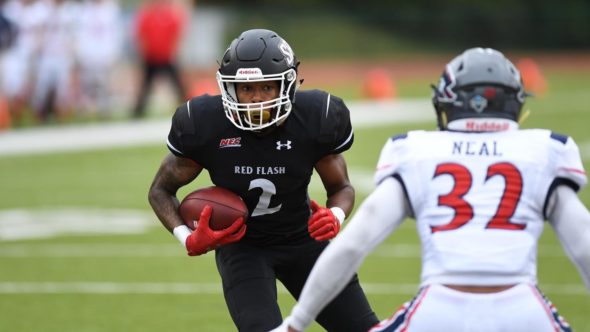 One of the top wide receivers in the FCS has entered the transfer portal. According to @RivalsPortal, RaShaun Henry the big and physical wide receiver from Killeen, Texas is leaving Pennsylvania.

This seems like, a new trend in FCS football. Henry is a 6020 wide receiver with big play making ability. He was first team All-NEC as a redshirt junior.  Henry can attend any school as a grad transfer.

Henry balled out last season hauling in 90 receptions for 1118 yards, and 9 touchdowns.  He had a huge season last year.  In the two previous year, Henry barely saw much playing time.  He has 109 career receptions for 1359 yards and 10 touchdowns.

Henry made our Small School Rankings

Last year he tore up Sacred Heart for 195 receiving on 11 receptions and one touchdown.  Henry can make acrobatic receptions. He will be a great fit for any FBS team looking for a big play receiver.

FCS players transferring to FBS programs through grad transfer has grown to a concerning level. This off season, a HERO Sports tracker reflects over 40 FCS players have transferred or have their names in the transfer portal, free to discuss a potential move with coaches at other college programs.  This is becoming much like the NFL’s Free Agency period.  This is becoming a problem for small schools, and their coaching staffs.

According to Yahoo Sports, Grad transfers in Division I (either FBS to FBS and FCS to FBS) nearly tripled from 2013 to ’18 – 58 to 166 with an increase each year.

Most noteworthy, we have watched some of the top FCS players leave already from the likes of Jabril Cox to Briley Moore.  As a result, this is going to hurt FCS schools and their coaches.