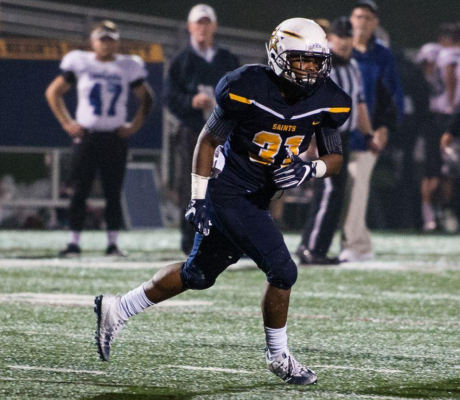 My university is a small university, but it’s an everybody knows everybody kind of campus and that’s why I love Siena Heights. Siena Heights is a big family and everyone from the coaches to the professors will do anything to help you grow and succeed. I am majoring in biology, and afterward, I want to either head to PT school or earn a master’s in exercise science.

My teammates would say my best quality is my work ethic and my ability to lead by example. I consistently work on my craft whether it is watching film to break down a team’s weaknesses or doing any type of fieldwork to improve my play on the field. I attempt to get it as close to perfect as possible.

I see myself as a leader by example who can lead on and off the field. I also see myself as the individual who knows a defense inside and out and feels like I can play in any scheme, but I have mostly played in a 4-3 scheme. I can play any linebacker spot whether it be the weak side, middle, or strong side. But, I believe I thrive at the weak side linebacker spot if I had to choose since I have the ability to track stuff down and cover ground from sideline to sideline. I can also play a role on special teams on punts and kickoffs.

The best player I have ever played against in college is Joe Connor, a running back out of Concordia University, who bounced around the NFL for a bit or Brandon Dillon, a current tight end for the Minnesota Vikings, who played at Marian University.

The teammate that impresses me the most is Kole Murlin; he plays the mike linebacker spot alongside me. But, he is a type of guy that has an incredible amount of talent as you can put him anywhere on the field and he will simply make plays whether it be safety, linebacker, or an edge rusher. Kole is a good chess piece in any defense you put him in. Another teammate that impresses me is my teammate Trent Morrow, he plays strong safety and can ball. He was named an All-American this past year, and he can cover on the back end just as well as playing the run. I’m happy I have him playing behind me because he can make it happen.

A time I overcame a struggle was when I went through my high school recruiting process. At first, I was getting Division I FBS looks and publicity from high school scouts until all of them admitted to me that I was too short for them and wasn’t a top recruit to get scouted. Later down the road I picked up Division I FCS looks and the same thing occurred as they said I was too small to play the position. I continued to work on my craft each day and I eventually ended up playing in the Blue-Grey All-American Bowl with some top talent throughout the entire country down in Arlington, Texas in hopes of a scholarship offer. I didn’t get one, but I knew after being named a starter in that game and holding my own with those guys I knew I could play at the next level. About three days after I had come home from Arlington, Siena Heights called me and offered me over the phone and I will be forever grateful to the school and that coaching staff for taking a chance on me.

If I didn’t play football, I’d probably be playing and pursuing baseball. I’ve always had a soft spot for the sport of baseball. I played up until my freshman year of high school, but I couldn’t participate since I had fractured my ankle during basketball season.

Something I am most proud of is playing a key role in my team’s success to go back-to-back seasons achieving the most wins in program history. My biggest achievement would be making the All-Conference team three years in a row. Another big achievement is that I became the school’s all-time leading tackler after three years. I just try to stay consistent with the way I play and I am just blessed and thankful that my consistent play has been recognized for the past few years.

A memorable play of my collegiate career was when we went down to St. Francis (IN), who was ranked #6 in the nation at the time, and we were the game of the week across the nation. On the first play of the game, I jumped an out route and caught a diving interception. We ended up winning that game 24-14. That game meant a lot because the year prior we had lost in overtime in the same hostile environment.

My favorite athlete is Jamal Adams, I absolutely love the swagger and confidence he carries himself with on the field. My favorite professional team is the Houston Texans. I don’t just model my game after one player, I model my game after several players. I look at many clips on youtube of Ray Lewis, Bobby Wagner, and Luke Kuechly. I try to incorporate little things from their game into my game to make it all come together.

I like to listen to a lot of music before games, but my favorite artists I listen to before games are Rick Ross, Moneybagg Yo, Meek Mill, or Lil Baby. Outside of that the artist who is probably my favorite is Drake.

My favorite comfort food is any type of breakfast food.

My favorite movies are probably any of the Bad Boys movies, any of the Iron Man movies, or Training Day. My favorite actor is Denzel Washington.

In my spare time when I’m not training, I like to relax and watch movies or cook.

What drives me every day is the fact that I feel like I need to prove something every day. I’ve had this chip on my shoulder from the time I was a young kid. In high school, when I went through the entire recruiting process I was told by a number of schools that I was too short and just didn’t have it. I still carry that with me to this day. I wake up each morning to prove to myself that I belong on this stage with some of the best athletes in the world. I have heard many times before that I couldn’t and wouldn’t get to this point, but at the end of the day I silence that noise and stay locked in because I know I can play on the big stage and prove myself right. I just need one opportunity.