Remember Bill Belichick was once impressed with Mitch Trubisky 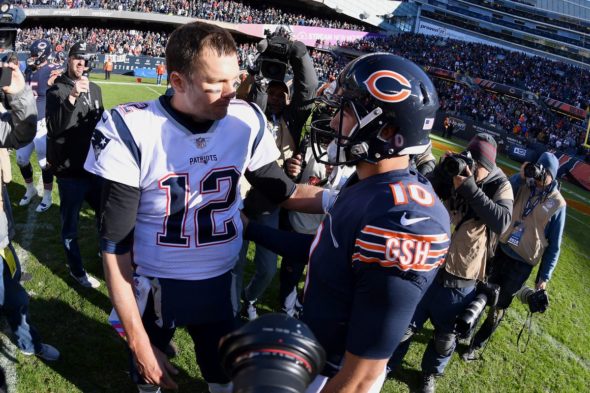 Could Mitch Trubisky work on the New England Patriots? I mean he is only 25 years old.

Is every quarterback available going to be somehow mentioned to the New England Patriots until they do something at the position?

That is the question you have to ask yourself. I honestly believe the Patriots will do something at quarterback. Today the Chicago Bears announced they would not pick up the fifth-year option on first-round pick Mitch Trubisky which has some scratching their heads. I remembered reading about Bill Beichick showing love to Trubisky and had to pull it up.

The #Bears are declining the fifth-year option on QB Mitch Trubisky, source said.

The team has liked Trubisky’s attitude since the Nick Foles trade and it’ll be an open competition. A chance for Trubisky to make himself a lot of money before his contract expires next March.

In 2018, Bill Belichick noted how impressed he is of the Bears gun-slinger after watching him on film.

“He’s done a good job for them,” Belichick said. “Athletic kid, big, strong, good arm, can throw the ball, make all the throws, tough, can stand in there, a hard guy to tackle. Some of the running plays he’s involved in. He seems to be probably more comfortable with the offense each week. They do a little more.”

He aded of Chicago’s overall offense: “They hit a lot of big plays. They’ve been hitting them all year though. It’s not like it just happened last week. They do it every week. They get the ball down the field. All of the receivers, tight ends, backs – he gets the ball to a lot of different people. They have a multiple offense. He does an excellent job of running it.”

Over the years, Belichick has helped numerous players turn their careers around in New England after appearing to be busts on other teams. Could this be the answer for Mitchell Trubisky?

The Patriots have more questions than answers at the quarterback position. They no longer have Tom Brady, and I am not sure they will really lean on Jared Stidham with Hoyer as their back-up.

Trubisky is only 25 years old, and at this point will the Bears even keep him on the roster?

From Trubisky’s perspective, this could be an actual opportunity to join a new team and become the starter right away instead of having to serve as a backup.