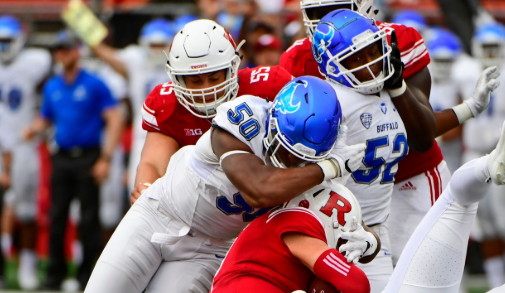 Yesterday, I took the time out to showcase my favorite running back in the FBS Jaret Patterson in a similar article, because I am from Western New York and root for the Buffalo Bulls. Well, it would not be fair if I did not write a piece on the best pass rusher from the MAC, Malcolm Koonce!

Malcolm Koonce is a beast on the football field.  The 6030, 250 pound pass rusher is very similar to Alex Highsmith who was drafted in the 2020 NFL Draft by the Pittsburgh Steelers.  Koonce has a knack for getting after the quarterback. He was a reserve defensive end for years playing with some talented players like the Harris boys!

Last year, Koonce was named First Team All-MAC, and racked up 9 sacks leading the conference.  He finished with 34 tackles and 11 tackles for loss.  Koonce played at Milford Academy prep school out of high school.

Last year the game that I thought was the most impressive was the Makers Wanted Bahamas Bowl played in Nassau, Bahamas, because Buffalo had to face Charlotte and Benny LeMay.

The Charlotte ranked 25th in the Nation in rushing.

Malcolm and company shut down the Charlotte run game holding them to just 80 yards on the ground.  Koonce would win Defensive MVP after tallying two sacks, five tackles and a forced fumble.  The Bulls had five sacks and Koonce had two.  The kid is a grinder.

I have to give credit to Taylor Riggins as well. The two of them wreak havoc on opposing teams offensive lines. Koonce has a quick first step, and power to be a very good player at the next level.

Koonce can put his hand in the dirt and shoot out a rocket.  Koonce reminds me of Alex Highsmith who I listed above.  His first step is great. He has several great pass rushing moves, and can bull rush.  The Bulls have a knack for finding pass rushers, just look at Khalil Mack and Demone Harris. Well, Koonce is the next name to remember. He will be dawning an NFL jersey in the very near future. – Damond Talbot, Owner, NFL Draft Diamonds