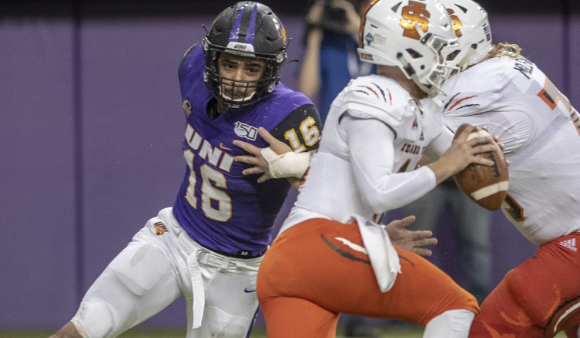 Defensive end Elerson G. Smith rose onto the scene in 2019 for the University of North Iowa Panthers. The defensive pass rush specialist was tied for third in the FCS with 14 sacks last year, and first in forced fumbles with five. His dominant performance landed him a spot on the AP Second Team FCS All-American squad for the first time in his career.

Smith added 63 tackles and 21.5 tackles for loss on the year, marking one of the best single-season performances in UNI history. He also contributed 14 quarterback hits, 4 pass breakups and 2 blocked kicks on special teams. Smith drastically improved on his sophomore season as he had 19 total tackles and 7.5 sacks for the year.

Elerson G. Smith and Tim Butcher met in the middle to take down Nathan Mays and close out the win over Youngstown State. #UNIFight pic.twitter.com/us0qptfBiy

The 6-foot-7, 245-pound defensive end out of Minneapolis, Minnesota is legit. He seemed to find himself last year as a dominant pass rusher that can hold his own when called upon in coverage. If smith can continue his dominance this season, he has a huge chance of possibly hearing his name called on draft day in 2021. He can play special teams and rush the passer, two things NFL teams are always trying to add to their rosters.

Elerson G. Smith maybe the best pass rusher in the entire FCS.  He has great speed and length. At 6070 his long arms seem to be a huge problem for opposing teams quarterbacks.  He really blossomed last year as a pass rusher, after being quiet in his earlier years.  He is a little light at 245 pounds, but reminds me a lot of Tanoh Kpassagnon of the Chiefs. – Damond Talbot, Owner, NFL Draft Diamonds