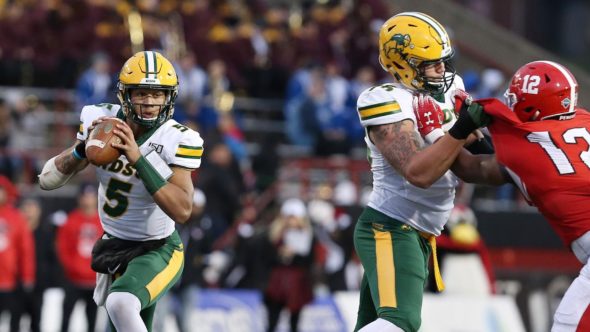 Last week I talked about North Dakota State University QB Trey Lance and his rising draft stock despite heading into his sophomore season. North Dakota State is the best college football team in the FCS. Since 2011 North Dakota State has won the FCS championship 8 times, including the last 3 seasons. While the FCS powerhouse has produced NFL caliber quarterbacks, they have a gem in the making here on the offensive line.

It is no surprise that Offensive Tackle Dillon Radunz is regarded as one of the top offensive line prospects in the 2021 NFL Draft Class. The 6-foot-6, 301 pound Left Tackle out of Becker, Minnesotta was responsible for Lance’s blind side last year. The 2019 AP First Team All-American started all 16 games at left tackle for the Bisons, an offense that broke all sorts of records last year. In 12 regular season games he played 682 snaps, with 63 knockdowns and allowed zero sacks. The Bisons rushed for a school-record of 4,601 yards, and quarterback Trey Lance had zero interceptions.

#NDSUSeasonOpenerCountdown: #75: He'll enter his second year starting at left tackle for the Bison in 2019, he's emerging as a potential NFL Draft pick. An All @ValleyFootball pick in 2018, the pancake from the title game is unreal. Number 75 from @BeckerFootball, @DillonRadunz. pic.twitter.com/PnBaVMeyg5

To say Radunz dominated last year is an understatement. His amazing season led him to being named 2019 Phil Steele FCS Offensive Lineman of the Year. Now, Radunz looks to continue his dominance entering his senior campaign. He is an athletic tackle that can get out on the edge and create space in the running game, while still being able to protect the quarterbacks blind side. Just took at him running down field in the highlight below, the man can move. I would personally not be surprised to hear his name called on Day 2 of the NFL Draft.

Wow … This LT for North Dakota State (No. 75). Sealed the five technique lined up over his outside shoulder before climbing to swat at the LB (who ended up biting on the reverse fake) then got on his horse to do some body knocking 30 yards downfield, helping spring the cutback. pic.twitter.com/bq2v7li08u

Dillon Radunz is a pretty athletic offensive lineman with great hips.  He does a great job at slowing down pass rushers and faces quite a bit of studs in the Missouri Valley conference.  He has the perfect frame at 6060 and 300 plus pounds. Additionally, Radunz could hear his name called in the 2021 NFL Draft with a great season this upcoming year. – Damond Talbot, Owner, NFL Draft Diamonds