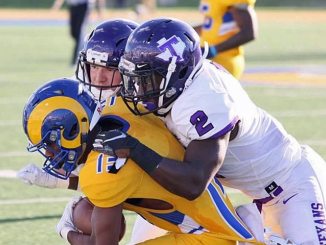 Tarleton State cornerback Devin Hafford will be a problem for opposing receivers this season coming up.

The AP Second Team All-American played a huge role the Texans defense in 2018 that ranked ninth in the nation in points allowed. Devin Hafford stacked up a ton of accolades in 2018, including being named a finalist for the Cliff Harris award, given to the best small college defensive player in the nation. Since arriving to campus in 2016, Hafford has made a significant impact every season.

As a true freshman in 2016, he played in all 11 games finishing sixth on the team with 54 tackles. He also recorded 1.5 tackles for loss, four pass breakups and one fumble recovery. During his sophomore campaign in 2017, Hafford led the conference in passes defended with 17. The 6-foot cornerback had 15 pass breakups and 73 tackles earning second team all conference that year.

His 2019 season was cut short after being injured in the first game against Stephen F Austin. Before going down for the year, Hafford had 4 tackles in the game. While he did miss all of 2019, he is expected to start the 2020 season for the Texans at cornerback. Heading into last season, Hafford was regarded as one of the best Division II defensive backs. He is certainly on the radar for many NFL teams this season. If he returns like nothing ever happened and gets back to his shut-down corner play it could be an eye opening year for Hafford.

Devin Hafford goes to #PickCity twice and D'Anthony Hopkins powers into the end zone and Tarleton built a 13-0 lead in less than four minutes #LSCfb pic.twitter.com/SpbfLpzPjj

When you watch the tape on Hafford you see just how physical of a corner he is on the field. He is not afraid to jam the receiver at the line of scrimmage, and can flip his hips at ease. I expect Hafford to bounce back this season and show why he is one of the best defenders in Division II.

I feel Devin Hafford could have possibly been drafted last season.  His injury set him back, but he will rebound in a big way.  The tandem of Prince Robinson and Devin was amazing to watch last season.  Hafford is a physical cornerback that I feel will have a huge season in 2020.  He has played since his Freshman year, and his cover skills are A1. – Damond Talbot, Owner, NFL Draft Diamonds