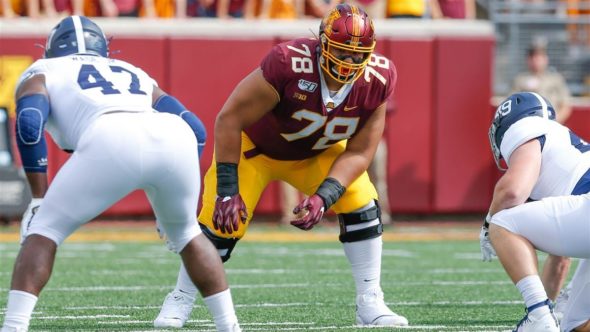 Minnesota Gophers offensive tackle Daniel Faalele is one of the biggest prospects I have ever watched on film.  I was breaking down film on several players last season and I fell in love with this kid.  Faalele played high school ball here in Florida at the IMG Academy.

When I say he is one of the biggest players I have ever covered, you have to look at his size.  Faalele is 6090 and weighs 400 pounds.  THAT IS A MONSTER, FOLKS! He would be one of the largest players to play the game in the NFL.

Faalele is from Melbourne, Australia and has only played football for a few years.  Faalele’s transformation to football happened in Florida.  Daniel has played both right and left tackle for the Gophers.

Faalele, started at left tackle for the last eight games of the 2018 regular season, has become a key member of a Minnesota team that’s made progress under second-year coach P.J. Fleck.

His Sophomore year, Faalele started all 11 games at right tackle, but missed two games with an injury.  His team blocked for an offense that totaled 5,616 yards and threw for 3,293 yards which was a school record.  They also scored 443 points which is the second most in Gophers history.

He is athletic too! You are probably thinking how can a 6’9, 400 pound man be athletic, but let me explain.  He was a basketball player and rugby player before he was discovered.  He attended a Jim Harbaugh camp and multiple Division 1 teams came calling.

So Faalele transferred to IMG Academy in Bradenton, Florida.  After sitting out one year to learn the game, Faalele began playing for IMG and landed a scholarship from Minnesota. The rest is history.

He has played in 21 games up to this point, but I think NFL teams are going to fall in love with his athletic ability and mold. I think he will come out early in 2021 and if he does watch for him to explode onto the scene.

When I watched film of Daniel Faalele I was blown away.  He is a MONSTER of a man, with brute force and quick feet.  I was expecting a sloppy kid, but he looked very athletic on film for his size.  His drop back/kick step has speed and he has power in his punch.  Faalele is huge and defensive ends struggle trying to get around him.  If he leaves early I think he could be a top 100 pick. – Damond Talbot, Owner, NFL Draft Diamonds