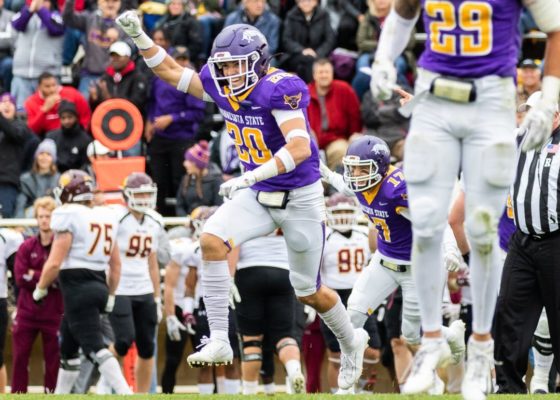 MSU Mankato is a great place to go to college. It has enough students where it doesn’t feel small, but you still get a lot of the benefits you would at a smaller school when it comes to class sizes and things like that. The city of Mankato is also a great community with lots of different things to do. I’m a business management major there.

I would have to say my leadership skills and hard-working qualities. I think it’s important to lead by example.

I think I bring a variety of different skills to the table that allow me to step into multiple roles. I have the range as well as IQ to play different zone coverages and deep middle as a free safety. Along with this, I’m physical enough to fit the run and set the edge as a true strong safety. Because of this versatility, I can effectively play a variety of roles in any scheme.

Jayru Campbell. He was a great player on the ground and through the air. Zimari Manning was also very impressive. These two were very explosive players that I put a lot of focus on.

Brayden Thomas. His ability to play the run and rush the passer makes life a lot easier for me as a DB. He’s extremely athletic for his size and does all the little things right.

In my red-shirt season, I struggled with not being out on the field every Saturday for a whole season. Football has always been a great way for me to deal with different stresses of life so not being able to compete was tough. Along with this, we had an 8-3 season which is considered far from acceptable in our program. Thankfully, my teammates and I used all of this as motivation and we’ve had a great three year run since then.

I would most likely play hockey. I played this until my sophomore year of high school. The fast pace and physicality make it a lot of fun.

Our team achievements in my career at Mankato are what I’m most proud of. In my three years of on-field competition, we’ve lost three games total and have been one of the toughest defenses in the nation. Along with this, we competed for a national championship.

Picking off Roland Rivers in the national semifinal game at Slippery Rock. This was their first drive of the game and I think it set the tone for our dominant performance that day. We gained a lot of momentum after we capitalized on the turnover.

I don’t have a favorite professional team, but my favorite players are Jamal Adams and Tyran Mathieu. These are both great players that I try to model my game after in different aspects. I like Tyran’s game specifically because of how versatile he is.

I would have to say my favorite artist is Avicii. His upbeat music gets me going and loosens me up before a game.

My favorite movie is easily The Dark Knight. Ledger kills the role of the Joker. Some of the Joker’s quotes in that movie are unreal.

I like to do anything outside that involves being active. One of my favorite hobbies is riding my four-wheeler. If I can’t be outside, I enjoy binge watching Netflix.

My family is what motivates me the most. They’ve always been there for me no matter what. Also, my hatred toward losing is a great motivator.