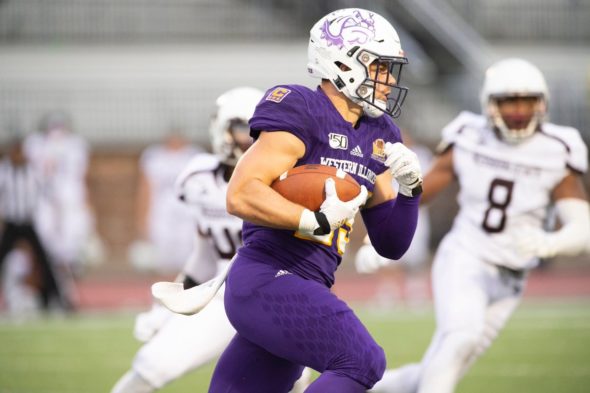 Clint Ratkovich may be the best fullback in the entire 2021 NFL Draft, he is a hard-nosed back with soft hands. Clint recently sat down with NFL Draft Diamonds writer Jimmy Williams.

Going to Western Illinois University was the best decision I have ever made. All of my professors have been amazing, the town has a homey feel, and the people are all welcoming. From day one of visiting I knew it was the place, I wanted to be.

If I asked my teammates what they thought my best quality was, it would be that I am very dependable. Football is a game that forces you to depend on your teammates to do their job, and also forces you to do yours. This also goes in life. When my teammates ask me for something or ask me to get something done, I will not quit until it is done.

I see myself as a leader on our team. Leading by example is very important to me and sets a standard for our team. If I had to choose a position that best describes my skill set, I would choose the Taysum Hill position. Over the last few years at Western, I have played many different positions such as fullback, running back, slot receiver, tight end, and wildcat quarterback. Being so versatile makes it harder for a defense to scheme against us. This also gives my teammates an advantage.

One of the best players I have ever played against was Robbie Grimsley from NDSU. Watching film on him leading up to my first meeting with NDSU, it was very clear that he had great ball skills and was an exceptional open-field tackler. You could tell that he had great knowledge of the game and was always in the right spot. And, when the game started, it was very easy to see that all of this was true.

If I had to choose one teammate that impresses me the most, I would pick our linebacker, Herschel Blankenship. When the NCAA announced that players were allowed to play in four games and still redshirt, he took full advantage of it his freshman year and earned his way onto our special teams. Since then it has been all uphill for him. He brings it every day to lifting, meetings, and practice. Herschel played some last year and performed great when he did. I feel by the way he works, he is going to have a huge impact this year.

A tough time in my life is when my dad had a stroke early this year. At the time when it happened, it really had a huge impact on our family. Thankfully, he has almost fully recovered from it.

If I did not play football, I would play hockey. Hockey was always a sport I wanted to play but never got the chance to. I feel it is like football in many ways because of how physical it is. I played a bunch of sports growing up, but hockey was never one of them. But, if  I wasn’t on the football field, I would be on the ice.

Being voted captain by my teammates is something I am very proud of. Being a captain is a huge responsibility and a great honor. The qualities of a captain are the same qualities that I strive to have every day.

Last season we had a home game against South Dakota. It was a very close game all the way through. We were able to rally late into the fourth quarter and made it close to their 10-yard line. With 30 seconds left, I was able to run it in for the final touchdown that put us up. Our defense then rallied and intercepted the ball to end the game.

My favorite athlete is Tom Brady. The way he goes about everything is second to none. Setting such a high standard for himself also makes his teammates better. He holds them accountable just as much as they hold him accountable. Tom has been bringing the same intensity to every game for 20 years, and his passion only gets stronger. This is why I model what I do by his actions.

I wouldn’t say that I have a favorite artist because I listen to all different kinds of music. Before a game, I like to keep it old school. Two songs that always seem to find their way on the gameday playlist are Lose Yourself by Eminem and Put On by Jeezy and Kanye West.

My favorite comfort food is for sure pizza. There is a place in Macomb called Larry A’s that has some of the best pizza I have ever had. A bunch of my teammates and I would always go on Mondays to their lunch buffet and try to clear the trays.

My favorite movie of all time is Step Brothers. I can’t count how many times I have seen the movie. I am fairly certain that I could recite the whole movie word for word at this point.

When I have some spare time I play some Xbox. I usually stick to Fortnite and Call of Duty.

My brother Shane motivates me the most. I would not be where I am today without him. Because of him, I am competitive at everything I do. When we are home together, everything we do is a competition. He doesn’t just motivate me in football, he motivates me in life.