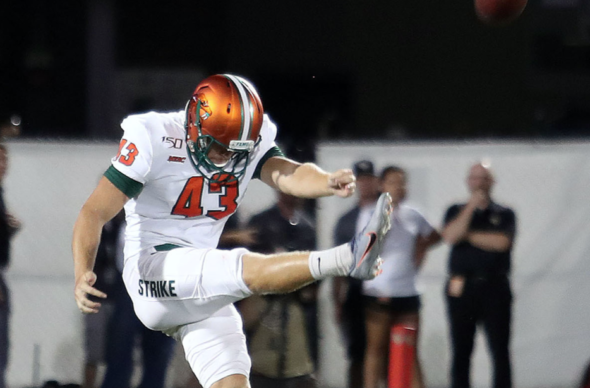 Punter Chris Faddoul has been one of the most consistent punters in all of the FCS. Picture Courtesy of famuathletics.com

Last week we talked about Bucknell Punter Alex Pechin, who was considered as one of the best punters in all of college football. Right behind him in 2019 was Florida A&M University Punter Chris Faddoul. The STATS FCS All-American Second Team punter averaged 46 yards per punt last season through 10 games. Faddoul has a cannon of a leg as he recorded 40 punts for 1,841 yards, including a season-long punt of 72 yards against North Carolina A&T State.

In 2018 Faddoul led the country in punting, as he was named an AP First-Team FCS All-American. Throughout the last two seasons, Faddoul has been arguably the most consistent punter in all of college football. During 2018, 17 of his punts were downed inside the 20-yard line. Last year, 19 of his punts were downed inside the 20-yard-line. Not only does Faddoul have a cannon for a leg, but he is also able to control his punts, something hard to find at the college level.

Last year, Faddoul was put up to the task of punting against college football powerhouse UCF. Faddoul delivered, as he was called upon 11 times punting for 533 yards, averaging 48.5 yards per punt. Four of his punts were downed inside the 20-yard line, including a 63-yard bomb that was the highlight of the game for the FAMU Rattlers in a 62-0 loss to the UCF Knights.

Just like Pechin last year, I expect Faddoul to have a monster season. I would not be surprised if Faddoul is invited to the NFL combine in February and finds himself competing for a starting spot on an NFL roster in 2021.

Faddoul is one of the best punters in the 2021 NFL Draft. He has a huge leg and has been a bright spot of the Rattlers team. Faddoul is consistent and does a great job at placing the ball where he wants it.  FAMU has a special player in Chris Faddoul. – Damond Talbot, NFL Draft Diamonds, Owner