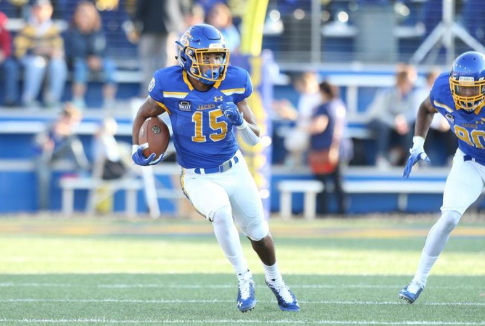 When talking about the best FCS receivers in college football, South Dakota State University WR Cade Johnson is a name that can’t be ignored. The shifty playmaker out of Papillion, Nebraska can just about do it all for the Jackrabbits. After another dominating season, Johnson was named an AP First Team All American.

Taryn Christion cocks back and UNLOADS a 52 pass Cade Johnson!

Through 40 career games Johnson has reeled in 162 catches for 2,872 yards and 28 touchdowns. Johnson also has 56 career kick returns for 1,492 yards and two touchdowns. His dynamic play-making ability on both offense and special teams plays a huge role in his rising draft stock this season.

Last season Johnson caught 72 receptions for 1,222 yards and 8 touchdowns, he was ranked seventh in all the FCS for receiving yards. In 2018, he set the single-season school record with 17 touchdown receptions to go along with 67 receptions for 1,322 yards. During that season he also broke the 100-yard receiving mark six times.

Johnson primarily plays slot receiver for the Jackrabbits. He runs a 4.5 40-yard dash and has a vertical of 32 inches. If he continues his dominance this season, Johnson could hear his name called on draft day next year. I expect a team to take a shot at him, as he has tons of upside.

South Dakota State wide receiver Cade Johnson has been a reliable wide out the last two years.  Last season alone he racked up 1,222 yards on 8 touchdowns and was the primary wide out for the Jackrabbits.  Several Jackrabbits have been drafted lately and I think Johnson will have a legit shot because of his ability to get open. – Damond Talbot, Owner, NFL Draft Diamonds