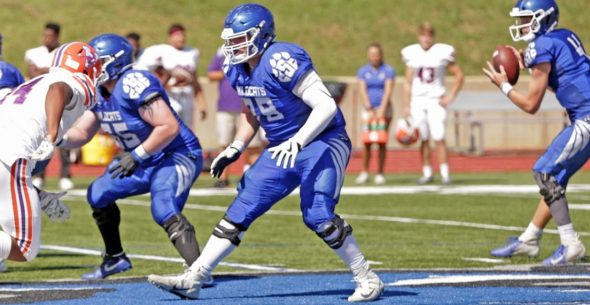 Andrew Rupcich is a monster at 6070 and 305 pounds. Last year, he had a great year earning NAIA All-American Awards. Check out this interview with Jimmy Williams of NFL Draft Diamonds.

Culver-Stockton College is a small liberal arts college in rural Missouri. This college to me has some of the most amazing views overlooking the Mississippi River due to the fact our school is built upon a hill. It isn’t your typical college town, but it allows for us to focus on the things that matter: relationships, school, and athletics. Our campus/town has a very diverse atmosphere where you don’t know what you are going to witness strolling through it could be students from all over the world or…… the amish riding around.

My major is Physical Education and Health where once I am done with football is my backup plan. Campus life is what you want to make it out to be, and I tell a lot of recruits this when they come onto visit our campus. You can be the type of student on campus who is sitting in their room all day long, or you can be a very extroverted person on campus. What I mean by being an extrovert on campus is essentially getting involved, going to the sports games, hang out with friends, attend events that are being hosted, and have fun.

My teammates usually say 3 qualities that best fit me. First, they believe I am a great leader both on and off the field that demonstrates individually and holds others to the highest standard. The second is the aspect of me too to change between my personalities. Off the field I am a very boisterous, fun, and goofy person who is about developing positive relationships and attitudes into everyday life. On the field I turn into a different person becoming very serious, determined, and motivated.

The role I see myself in on a team is obviously that I will do anything that will better a team no matter the task. Currently on my team, my coaches believe I am a spark for the offense. You would normally not think an offensive tackle can be a spark, but when it comes to getting big pancakes and blocks the whole team gets super excited and it usually gives off positive actions from everyone else in return. In the future, I see myself as a solid tackle in any scheme or position. I have been a part of both a very run heavy offense and a part of an air raid offense. I personally think my ability to pass sets is very effective in protecting the quarterback because that dude behind me is the most important person in the game.

In college I have played the best competition in the NAIA, but if I had to narrow it down to one person it would be between two people. The first one would be Austin Ciuchi  who was an All-American from Grand View University. He was an OLB that lined up at edge rusher most of the plays. His mixture of speed and power was better than most of the players I had to go against in my conference.

We’re extremely proud to award the 2019 Piesman Trophy to Andrew Rupcich of Culver-Stockton College for this outstanding throw.

Andrew’s the first NAIA winner of the award as well! pic.twitter.com/LX7NzQDjay

The teammate that impresses me the most is one of our linebackers Dalton Huffman. This dude came in freshman year at essentially the bottom of the depth chart at his position. At 5’9 216 lbs this guy is one of the most hardworking dudes I know. He also never has a bad attitude toward the game of football, and is a tremendous leader. He is one of the hardest hitting dudes on the field at any given time, and doesn’t care about the stats as much as he does about winning. Altogether Dalton wasn’t given the gift of size but makes up for it in work ethic and aggressiveness.

When I think of struggle in my life I think of opportunities that I had to overcome. The first would be the struggle of when my parents were divorced. At such a young age I had to face the changes in my life that usually is a very negative time in their life. I believe I overcame that by bringing a positive attitude to life. The second would be some injuries that could’ve kept me out of games but I persevered through and never missed a game. The injuries included a MCL sprain and Midfoot sprain. Both very serious injuries in football but no matter the pain I went through I just wanted to be there for my team and be that guy everyone could count on day in and day out.

If I didn’t play football I would be playing basketball. I believe this because I played basketball all 4 years of college, and not to mention in my 3 years in college I am a 3-time Intramural basketball champion. I might be 323 lbs but I run the floor up and down when I get the opportunity too.

There are two things that I am most proud of. The first thing would be in May of 2019 I was announced as the Male Athlete of the Year for the whole college. It is important to me because you do not see that kind of award being awarded to offensive lineman especially campus wide. The other would be in December of 2019 I was named to the AFCA 1st Team All-American. I believe this is my biggest achievement, and I am proud of it because it just shows everything I’ve done in my life to get to this point wasn’t for nothing. I had the goal of becoming an All-American and now I get the opportunity to achieve that goal twice.

The most memorable plays of my collegiate career would have to be the play that won me the Banner Society’s Piesman Award. An award for lineman who perform a play that is unlineman-like. This consisted of a 3×1 formation with 1 receiver to the left of me. The play seems like a sprint out to the right side of the field, but I leak out for a lateral pass from the quarterback. When I got the ball I had two options: one was to tuck the ball and run, and the other was to pass the ball to the receiver. The receiver was to run a lazy slant route but then break it off into a corner route. I obviously took the passing route because that is a dream of any offensive lineman to be the star. The play grew into national spotlights being shown during Sunday Night Football.

My favorite athletes are Tom Brady and Lebron James. I try to model my game after Taylor Lewan.

Luke Combs is my favorite music artist. I listen to Eric Thomas, Rock, and Hip hop to get pumped up.

My favorite actor is Will Ferrell and I like Star Wars.

My family is what motivates me along with the desire to win.