The weighting game: Today’s players vs. the all-time heavies 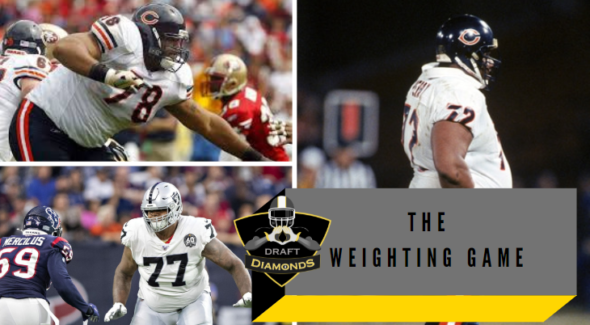 Bigger isn’t always better when it comes to the NFL, but it’s certainly a factor that is taken into consideration. While many players have actually slimmed down to get in shape for the league, losing the excess weight they carried into college or high school games, there have been many top players whose girth was their greatest asset. Whether you’re playing offense or defense, size does matter, and the sight of a 350lb tackle heading your way at full speed can make even the staunchest player quail.

The NFL Hall of Fame has more than its fair share of serious heavyweights. Other players have gone down in history more for their impressive poundage than for their actual achievements on the field. In recent years, the league has considered introducing a maximum weight limit for players, but so far this hasn’t materialized, and 2020 still has plenty of big guns currently on the benches. But do today’s sizeable sportsmen tip the scales against the giants of yesteryear? Let’s take a look at the figures.

The heaviest player in the NFL in 2020 is currently wearing the #77 shirt for the Las Vegas Raiders. Brown, 27, weighs 380lb and stands at an eye-watering six foot, eight inches, putting him into the top five NFL heavyweights of all time. Bestcasinosites.net have summed it up with their list of the biggest players in history, and Brown is right there holding his own next to some serious contenders.

The Texas-born tackle played college football for Georgia Military College and the University of Florida, where he was the biggest offensive linesman since Max Starks in 2003, and as Starks was the biggest player to ever wear a Florida Gators shirt, that’s saying something. Picked up by the San Francisco 49ers in the seventh round of the 2015 draft, Brown joined the Patriots in 2018 and the Raiders the following season. His $66m contract with the latter, with $36.75m guaranteed, makes Brown the highest-paid offensive lineman in the league and, according to experts, definitely one of the best.

Pound for pound, Brown is a match for The Refrigerator himself, the great William Perry, who thrilled football fans in the 1980s and ‘90s. But Brown has a good five inches in height on the Fridge, who at 6’ 3” had greater width that he put to great effect as a defensive lineman. When Perry joined the Chicago Bears as a first-round pick in 1985, he weighed in at 335lb. Later that year, he became the heaviest player in league history to score a touchdown.

Perry’s winning personality, as well as his impressive appearance, helped make him a superstar. His Super Bowl ring was famously the biggest ever made. But when The Fridge started to reach his maximum playing weight of 380lb in the late ‘80s, many were worried that for a player of his height, this constituted life-threatening obesity, and pleaded for him to slim down. Sadly, since retirement, Perry has continued to battle health issues, including obesity and weight-related diabetes.

In the 1980s, Perry’s size made him a sensation. However, in the last decade or so, seeing football players that weigh in at over 300lb has become relatively commonplace. It’s true that in the 21st century, players have generally got bigger and heavier. Second to Trent Brown in 2020 is Zach Banner at 6’ 8” and 360lb. Currently with the Pittsburgh Steelers, the 26-year-old was twice nominated as an All-American while playing high school football.

While Nate ‘The Kitchen’ Newton initially weighed 400lb, he slimmed down to 335lb for his glory days with the Dallas Cowboys. Meanwhile, the St Louis Rams signed the 6’ 10”, 403lb Terrell Brown in 2013, but he never made it out of training camp. This leaves Aaron Gibson as the sole representative of the 400+ club and officially the heaviest player in NFL history at 410lb on a 6’ 6” frame.

Gibson weighed 386lb when he joined the Detroit Lions in 1999, but hit 410lb in 2002 while playing for the Dallas Cowboys. His career peaked in 2003 as a right tackle for the Chicago Bears, but after a stint with the Buffalo Bills his NFL career ended after the 2006 season. Gibson’s weight arguably made him more prone to injury than most, and he never truly fulfilled his potential as a player.

Today the players are bigger than ever, but true giants of Gibson’s stature don’t come along too often. Maybe that’s just as well. The likes of Trent Brown, Zach Banner and Daniel McCullers are great players as well as being massively-built, and they know that keeping in shape is more important than piling on the pounds for the sake of it.