Is the best FCS wide out in the 2021 draft named Samori Toure? 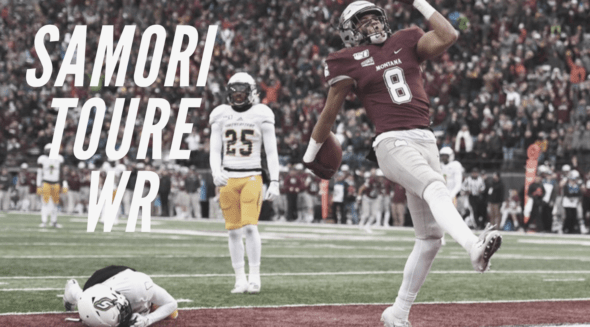 Samori Toure is a speedy wide out with great hands. He is destined for a huge season in 2021

Samori Toure is a 6030 and 195 pound wide receiver with great hands and speed. Toure is a Portland, Oregon native that has really blossomed into a top prospect in the 2021 NFL Draft.

In 2016, Toure was a redshirt freshman at Montana. He would finally get some playing time in 2017, and finish as the fourth leading receiver. He caught five TD passes with 553 yards on 31 receptions. Toure played in all 11 games.

In 2018, Toure landed a starting position. He started in every game but one, and finished the year with 37 catches for 440 receiving yards and two receiving touchdowns.

Samori Toure finished 2019 like he was pissed off. Toure went for 1495 yards receiving on 87 receptions. He also scored 13 times. He averaged 17.2 yards per reception and finishing second in the FCS in yards and 6 in the FCS in touchdowns.

The 2021 NFL Draft will be approaching soon, and we at NFL Draft Diamonds hope you will pay attention to Samori because he is a special player.