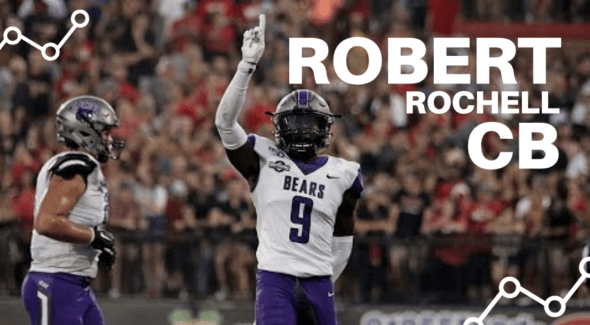 Robert Rochell is one of my favorite prospects in the 2021 NFL Draft.

Rochell is an athletic freak. The 6020, 180 pound cornerback is not just fast, he is can jump the out the gym. He ran the 100 meters in high school in a 10.8, which was third in the state of Louisiana.

He was a running back, proved he could catch the ball out the backfield and was a shut down corner in high school. He would go on to Central Arkansas where he would sit out his first year in 2016, but 2017 he would began to get his feet wet in the FCS.

Robert Rochell took over as the starting cornerback for the Bears last season and he played in 13 games, where he produced 44 tackles, came away with five interceptions. I was super impressed with his skills and then found some film of him doing box jumps. I knew he was fast from high school, but the explosion in the box jumps were insane. This kid is a freak. I know the grade from the Analytics has him lower than some of the others when it comes to athletic score, but I am willing to say this. He will tear up every FCS prospect when it comes to athleticism. I have him getting his name called in the NFL Draft and I would not be shocked if he is a Senior Bowl participant. Rochell is explosive and with another huge year, he will be my top DB prospect in the FCS. – Damond Talbot, NFL Draft Diamonds Owner.