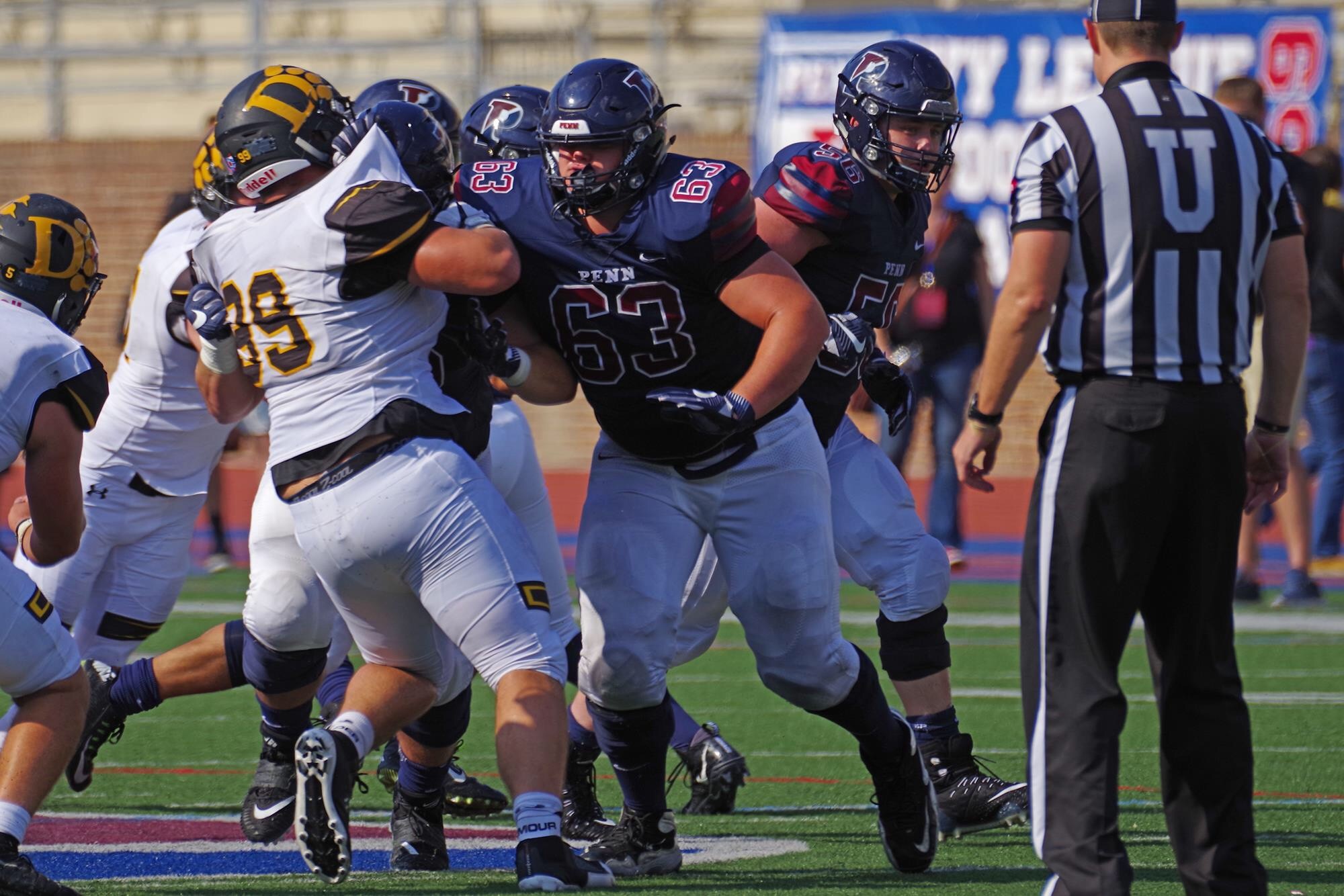 Penn OL Tommy Dennis is a monster and needs to be looked at by NFL scouts. The kid has a mean streak and is easily one of the best small school OL in the draft.

Gets the job done up the field as a run blocker. He is a second level, physical body mover.

In pass protection he didn’t relinquish a sack in 246 pass attempts while playing every snap of the entire season for 3 straight years. Integral part of a O-line that was ranked 12th in the FCS this past season.

Scouts projecting Dennis as a interior guy at the same time he does have the size and athletic traits to play OT if that is needed. Played center in college as well knows his way around the line can add depth with his versatility along multiple positions.

The Thick, strong, physically aggressive Dennis is dynamite off the line. He can lock onto pass rushers like a pitbull locks on a bone. He is a Sound blocker with hand placement in the inside of the pads. He has a good and powerful grip with his strong hands & arms. When out in space into the second level he pancakes D lineman like IHOP. Natural movement, with shear uninhibited brute force. At the center position he shows a good snap get off and has the true road grader style to succeed at the center position too. Centers have great football IQ’s much like Inside linebacker because they need to know plays and also formations, audibles & pick up combo blitzes or stunts.  I really see him inside more although he measures up outside. I see him as a true Center or Guard. Think he ultimately hold the line better inside than out. His skillset in run blocking (bend,intelligence & good technique) when at Center seems to fit the interior of the line.

Tonu is a athletic physical OL prospect with a great passion for the game.

A First team All Conference player who I can honestly say if he attended a larger school could be a day 2 – 3 guy without question.

Not many OT’s can move like Tonu. He is one of those rare guys that was a tight end in High school. He Can slide out, and get to the second level to create havoc. Has the burst to get out in front for the run game. Good bend, can burst off the line like a big Fullback or tight end. Played both left & right tackle at an All Conference level. I honestly believe he can succeed just about anywhere on the line but I really think O-tackle is his position. Particularly right tackle! He looked especially adequate on that side of the line. Really use him going forward more than dropping back lounging in the cut but from what I saw he has the perfect frame, and physical gifts to be coached into being a top flight pass protector as a pro. Hand placement is on point, he has strong arm strength as well and understands leverage moves like a freight train barrelling down the track without a conductor. Toughness is not a problem, he is the true meaning of the phrase road grader.  Good vision and awareness. He can zero in on his blockers lock onto a defender redirect or knock him into next week.  A little tight on his dropping into pass protection but still moves fast enough backing up. Seems to need more repetition technique to fix minor tweeks. Cause sometimes his pass protect is on point. Needs to get use to dropping back as much as he moves forward see him anchor the line hold a deep pocket. Has the physical makeup of a true O-tackle but he would be a excellent guard candidate as well. Looks real fluid laterally side to side moves flawlessly so we know he has the tools needed for the job.  If he Just gets lower & wider on pass protection then I think he has a ton of upside at OT.

A Natural center or Guard who can play both run & pass downs.  Started all of the 14 games his Senior season at Center for an excellent Buffalo O-line. Under center for top 10 QB Tyree Jackson. Jackson being 6’7 & O’Hagan a 6’ 2 impressed with the consistency of O’Hagan’s snapping the ball. Also paved the way for 47th ranked run Offense in the country averaging 4.53 yds per play. The OL was even better against the pass ranked an impressive 31st in a unbelievable year for the Bulls.

Reads the play efficiently pre snap.  Drives defenders back, churning his legs. He Places his hands ahead of his eyes and drops weight. He can get out in front of backs quickly, efficiently creating run lanes. Functional strength and full body power with a athletic ability on the get off. Very intelligent, and can read the D presnap make the necessary adjustment from run to pass or vice versa. Can blast off the line finding work on multiple levels actively using his constant motor & outstanding powerful hand work to pave the way for a running game create nice size gaps in the D. Can slide down the line laterally, athletically in pass protection. Holds a wide pocket maintaining his block wide stance good flexibility in his hips & quickness in his feet side to side. Has a heavy lean, strong upper body and keeps his legs spread, holding the line and anchors like a longshoreman.  Gets moved back rarely, gives his QB not only time but space to make the play. Good upper body flexibility balance can take a hit bounce back not losing his feet.  Finishes till the play is done plays like his hair’s on fire intense grinding battling every down.

First acquainted with his tape at the FCS Bowl where I thought he looked good throughout the week. With 42 consecutive starts on the O-line he shows the toughness durability to be a player a team can rely on. A 4 year captain shows the type of leader you are getting in Sallila. Has many accolades with great tape to match, and he should get an opportunity.  At the RG position most likely, where I think he shows the tools to be effective in both the the run & pass game. I look forward to his Pro Day March 20th at Harvard think he should test well in strength, agility & quickness in front of scouts.

Powerful from the snap, has beastly push using his leverage that can plant & punch with tremendous power. Athletic on run blocking and laterally moving down the line. Finds work, Keeps his legs advancing no matter the direction. Shows stability, hand placement and most of all brute force. To not only create a small hole but to legally drive defenders into the ground like a sack of potatoes.  Played a lot of misdirection option type run plays. Shows the versatility, and experience to run block in any direction. Significant natural strength seems to possess the organic strength to be an asset in run blocking. He is Intuitive pre snap, and understands his assignment when the ball is snapped. Obviously a good character prospect as a team captain. The mental makeup to be a leader on & off the field. On pass protectection can swing out pretty wide. Good bend keeping the defender from getting to his outside shoulder.  Whether blocking the exterior or interior can plant himself in the ground like a mighty oak. At the tackle position although lacking the overall height does show movement needed to keep defenders from getting to his QB.

More than adequate follow through as he finishes with a vengeance.

Absolute beast getting out in space creating space for his RB’s to easily move through. Big man isn’t supposed to move like that.He moves better than many smaller athletes.

Will be able to move even better when he gets down to his optimal weight. He is aware of that but there is a lot to like about Trezvant’s game. Think his ceiling is OT which is worth taking a chance on. Might end up an OG but something tells me the right situation OT is attainable. I’d like to say I think Trezvant has a good attitude, willingness to do whatever it takes to live his dream. Can appreciate that plus he has been real easy guy to  talk to as I built his profile. Over the last couple months as I’ve gotten to know Trezvant & try to study his tape as much as I can.

Mauler in the run game. He can burst of the line getting his hands out.  He is an Intelligent player who gets out on combo blocks to the 2nd, 3rd level of a D. His Movement is good in the run game keeping his eyes on the defenders.  Gets out in front on run blocks powerful pin & lean. He drops his weight on defenders clearing not 1 lane but more like a 4 lane highway.  Long arms coupled with a sturdy upper body & wingspan. Has grown man/country strength. His punch can knock defenders back like a Tyson uppercut.

He seems to be a better pass blocker at OG although I think it is a matter of repetition of fundamentals. Had a mobile QB at Briar Cliff & when pass plays broke down noticed Trezvant holds down his gap creating space for the QB to scramble. Most defenders want no part of trying to get by the big man’s grasp. He can literally fold DL & LB’s like a cheap suit or catapult them out the way. Massive anchor to hold the line in the pass game. There is an awful lot to like think if he can get the right training & coaching Trezvant can make a name for himself.