Spencer Schnell of Illinois State is a playmaker. Check out this amazing Scouting Report by Draft Diamonds Scout Matt Anzio 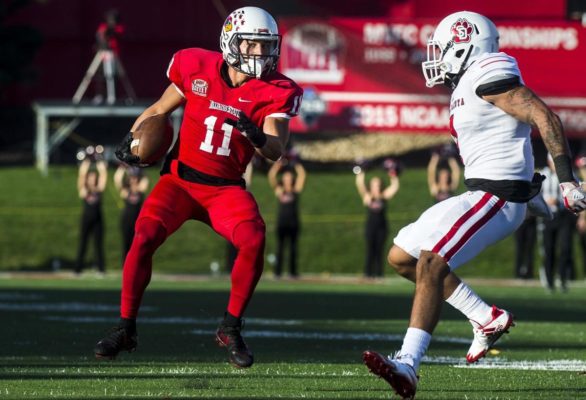 When you are 5’ 9  receiver you need to be physically & mentally tough person.

Usually means you will be delegated to the slot & put on slants right in the middle of the field where you could be up ended by a safety or even a big linebacker. Blocking is essential in the slot as your called upon on tight formations to run block in the trenches. Have to be able to take a inch to turn it into a mile.  Make tough catches in traffic often contested pound through tackles for 1st downs.

At a glance, Spencer doesn’t strike fear in the heart of opponents but don’t let that fool you as he can make the tough grabs & break tackles against much bigger defender’s.

Schnell is a tough player with killer instincts who knows how to get open. He knows the route tree well & runs through routes finishes keeps moving on the top of routes. Shifty quick in & out of breaks rapid stop n go. Knows how to get open sells fakes, quick stutters head nod he finds his way open. Spencer is open consistently he is a homerun threat or a security blanket.  With great yard after the catch ability, toughness to run cross routes up the middle can take a hit keep moving forward.

Don’t like making comparisons but I see a little Amendola in this young prospect. He can be a PR specialist too, which we know is where Amendola got his first opportunity on special teams. Not quite as speedy or gifted as Doug Baldwin but makes up for it with grittiness & heart. As well as his football IQ understanding of the offense vision in his lanes.

Kind of an underdog from the jump not highly recruited out of high school he played for Ohio U in 2014. Then chose to transfer to Illinois state where he redshirted 2015 but exploded on the scene in his 2016 debut. I see a similar route will be taken in the NFL or CFL. He might not be on many people’s radar at the moment but eventually could be an exciting slot/ PR guy that will be an important piece to a teams roster.  Some teams really value these smaller quick slot guys does add an extra element to any arsenal on offense.