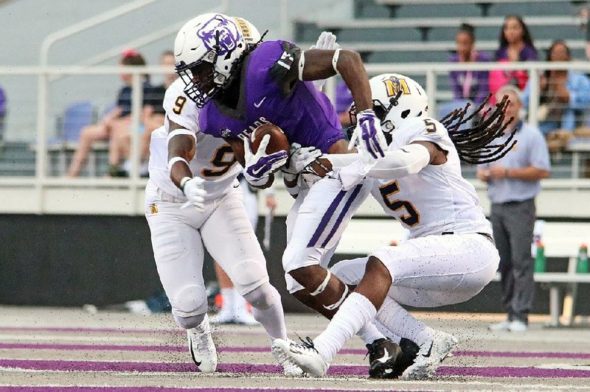 Positives: Has adequate height & length. Gets off the LOS with an okay first step, shows some ability to stem his routes. Can use his eyes, AA, and hips to set up a CB for a double move, relies on COD skills & double moves to create separation on post routes against man coverage. Can find the open space in zone coverage while running routes up the seam, is willing to go across the middle & layout for short to medium passes against zone coverage. Demonstrates good mental processing & field awareness to box out a DB in zone coverage near the sideline on flag routes when fighting for the 50/50 ball. Flashes decent hands-on medium & deep routes. Shows decent vision & AA to find & get to open space when fighting for extra yards after the catch.

Negatives: Has a small frame, route tree seems to be limited. Does not show much foot speed to eat up a DB’s cushion, shows little burst out of his break on the in route & middle screen. Tends to bring in passes into his body instead of attacking the ball with his hands more times than not. His strength & ability against press coverage is a question. Only has marginal breakaway speed after the catch.

Summary: A two-year player for then head coach Steve Campbell & current head coach Nathan Brown at Central Arkansas after transferring from Mississippi Gulf Coast Community College. Was used as a Z receiver & motion man in coach Brown’s offensive scheme. Overall, Wells is a WR that relies on AA, COD skills, and double moves to create separation & get to open space after the catch. He will need to add weight to his frame and demonstrate that he can run more of the route tree. Will fit onto a team in an offensive scheme that emphasizes short to medium route where he can utilize his COD skills & vision. Can develop into a serviceable slot or Z receiver.