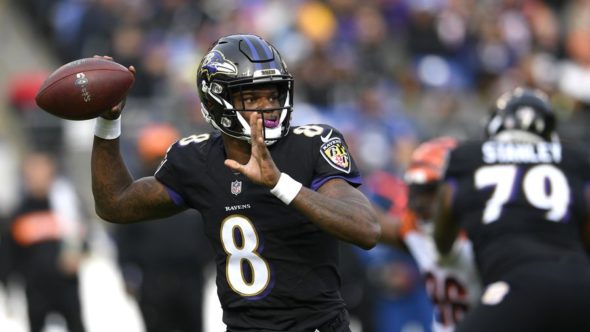 Last week Lamar Jackson in his first career start was a running machine.  The Bengals could not stop him, and he said he even had Bengals players threatening to break him.

“[Bengals players were saying] we’re going to hurt you. This is the NFL.” Jackson said, per The Athletic’s Jeff Zrebiec. “I was laughing.”

This week Jackson says the team is not looking to run the ball as much. He told the media he will be chucking the rock this week.

“They’re not here to block,” Jackson said. “You guys know I can throw. … I ran 27 times [Sunday], even though I didn’t try to. We did whatever it took to win. You know, hopefully I’m going to start throwing the ball more. The game plan that’s coming up, we’re going to be throwing the ball. You’ll see.”

What do you think Lamar Jackson will do this week?  I am going to say he finishes with 220 passing yards and three touchdowns through the air. Remember John Brown, I think he has a good day this weekend.