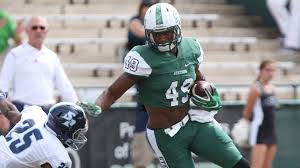 Stetson TE Donald Parham has tons of talent. He will be a steal for someone in the NFL

The Former basketball player turned tight end is 6’8 with a lean long Frame long arms & large hands. He could be a weapon in the red zone in the Pro’s.

Had over 800 yds receiving as a JR as he looks to improve his numbers even more in his SR season. He is there number 1 receiving weapon on the team with 81.7 ypg  and 58 catches also is the best on the team.

Goes up and over defenders using his outstanding size & reach to win battles and brings new meaning to high pointing the ball. Not afraid to catch up the middle or in tight coverage. Catches the ball with ease , soft hands a real natural athlete. Faster than he looks has long strides and understands how to get open either using his monster frame or running good routes, he finds a way to make plays.

He is beyond a sleeper at this point despite his good numbers last yr. IF he can can show blocking ability, play more ST and continue improving his numbers and production. I could see someone taking a day 3 Flyer on this behemoth  playmaker.

Think he is more of a slot type pass catching TE but that does not mean he could not play inline with his monstrous body type ridiculous arm length could be a commodity in run & pass blocking schemes.

Check out Draft Diamonds on Youtube to watch Parham’s outstanding highlight tape & check out the draft diamonds site for an interview with the talented exciting young baller.