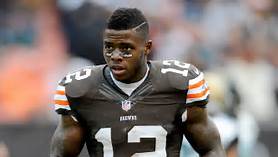 Today the Cleveland Browns announced they are releasing WR Josh Gordon. This is very troubling considering he has had trouble with drugs in the past.  There have been multiple reports that he showed up late to team activities today, which I can confirm.  There are also reports that Gordon was not himself.  Those I cannot confirm or deny, but I can say he did claim he was injured in a promotional shoot.

Gordon told his team he was injured and they became upset. They ruled him out for this weekend’s game and later in the day they released him. Gordon is now a free agent and vested.  That means that any team can sign him tomorrow. The Browns were not big fans of that, so now they have opened up their phone lines. With that being said, remember his contract is only 697,000 dollars this year.  That is a cheap contract for a potential superstar of a wide out.

They have five teams at least calling them and there is a market for Josh Gordon.

The #Browns announced they are releasing Josh Gordon, but they may not get there. I’m told as many as five teams are researching possibly trading for Gordon. Cleveland has a market.

Here are five teams I could see trading for Gordon and his services.

Are you kidding me?  The Patriots have four wide outs on their roster after releasing Bennie Fowler today. The Patriots have not had a talented wide receiver like Josh Gordon on their team since Randy Moss.  If Tom Brady and Belichick can somehow get Gordon under their wings, he maybe able to change his life around.  Right now losing probably does not help his self-esteem.

Raiders absolutely love misfits. Shoot they just signed Martavis Bryant who is facing a year suspension. The Raiders and Jon Gruden want to win now. I would not be shocked if they traded for Josh Gordon.  Gordon is a solid player but I am not sure he would be a good fit in Oakland.

The Seahawks best wide out Doug Baldwin is injured. Right now they seem like my darkhorse to land him.  Seahawks do not care what you are going through. This week the team signed Mychal Kendricks, who is facing 25 years in prison for insider trading.  Are you kidding me what is a little drug use?

Colts need wide outs bad.  I am not sure if Chris Ballard wants to deal with Josh Gordon, but imagine Josh Gordon teaming up with TY Hilton?  This would be a great fit in my opinion and it makes tons of sense. I could see the Colts taking a flyer on him.

Cowboys need wide outs, and Josh Gordon could be a huge asset to the Cowboys. I am not sure Jerry is ready to babysit another wide out but he could definitely help them out. Right now Deonte Thompson and Michael Gallup are not the answer. Cowboys need a deep threat.

I would like to add the Buffalo Bills to this list, but that would be a ballzy move and I am not sure this administration can make ballzy moves.  I could see the Rams and 49ers making this move though. We shall see…..