2018  Has been off a great Senior Campaign 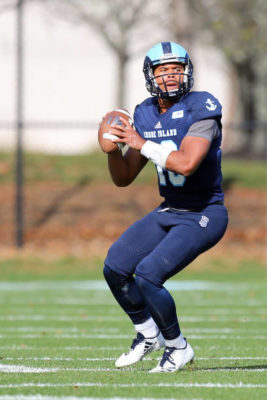 Lawson has developed into a true dual threat starter for the Rams.

Putting up over 300 yds in 2 of 3 games thus far early in the season he is starting to draw attention in a good way to himself. Solidifying himself as the starting QB for Rhode Island.

Goes thru progressions and read the field efficiently. Smart with the ball in his hand is most definitely a pass first QB that only runs as a play breaks down to avoid a loss  or on designed QB runs. When he does run he has dangerous 4.5 speed and the toughness of a RB. Throws darts on crossing routes gets the ball out of his hand urgently. Reads the D adjusts as needed releases the ball fast powerful arm strength. Could be a good RPO QB reads & reacts in a hurry. Precision arm motion with a strong pocket presence he has become a true passing threat. Ability to make plays on the move while always keeping his eyes down field  strong arm & frame can break free of tackles to keep plays alive. Good shifty footwork, body movement, pro style stance gets his shoulders square steps into his passes with quick release. Uses his strong frame to power past defenders in the run game but has good elusiveness for a tough type of passer.

Can’t measure a man’s heart but he keeps his team in games spreading the ball around to all 3 of his wideouts & TE. Smart versatile athletic player that could go from virtually unknown QB, outside of R.I. too a QB that gets drafted on day 3. The fortitude to produce comebacks along with game changing plays consistent pass efficiency & red zone prowess makes him a prospect on my radar.

Although lacking overall height he has good size stout muscular frame sturdy enough to endure a pass rush or on a scramble. Reminds me a bit of Dak Prescott similar traits although Dak played for a much more NFL ready school in Miss State & has a couple inches on JaJuan I see the same heart toughness & quick release that made Dak a mid round pick can make a small schooler like Lawson a late round steal. A chance to get a look at a camp possibly in the preseason ,he has that it factor you look for as a scout. The grit determination mixed with intelligence & athletic ability no doubt in my mind he will be fighting for a roster spot next summer in a NFL camp.

Understands the D well enough to convert to wide out if needed but i really like his arm & QB talent think it would be a waste for him not to get a shot under center.