Eric Dickerson is right, the NFL should compensate the Hall of Famers 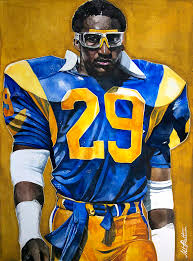 Former Rams running back Eric Dickerson is sticking up for Hall of Famers.

Eric Dickerson is right, the NFL should compensate the Hall of Famers By: Mark Thomas

Earlier this week Hall of Fame running back Eric Dickerson released a statement saying that the Hall of famers will boycott the annual hall of fame ceremony due to poor pensions and having health care.

Dickerson said that Hall of famers should get around 300,000 per year. Dickerson sat down with Shannon Sharpe and Skip Bayless on the show “Undisputed” and he says he talked to a former NFL player and that player is 74 years old and still working because he needs health care.

He also explained talking to Deacon Jones, the same Deacon Jones who created the term sack and one of the best defensive lineman of all time, when he was alive he was receiving a pension of 200 dollars a month. How can we as “hardworking” people judge Eric Dickerson for try to help those who paved the way for what the game is today.

People don’t realize players from the 60s,70s and 80s were not heavily compensated that they are now. Dickerson is doing it for those who don’t have a lot and those who will need it. No other league has this issue when it comes to health care and pensions. The next CBA hearing is in 2020 and this needs to be one of the issues addressed.