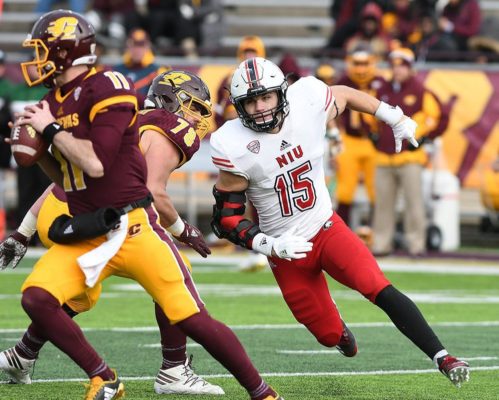 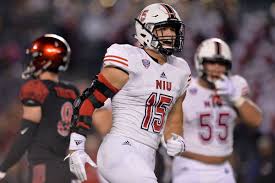 Sutton is a savage coming off the edge or in coverage.

A record breaking All Conference explosive exciting OLB that explodes off the edge with reckless abandon. Can win with speed or his tremendous strength, watched him throw 300 lb   OT’s out the way like a sack of small potatoes. . The real deal 14 sacks in 2017 obviously he can get after the QB and hunt down RB’s with undeniable tenacity . Can bullrush or just straight run around OT’s he finds a way to win on the outside with consistency . Attacks like a starving pit bull in a butcher shop.  Also has the play recognition to play ILB but his coming off the edge superstar ability is hard not to take advantage of.

Great ball awareness always looking for the big sack or turnover. Lethal with ball in his hand  with 2 defensive TD’s runs more like a RB then a LB with the ball in his hands, as a former HS All Pro RB  but hits hard like a DE then a LB when he gets home . Athletic and very aggressive closes fast doesn’t miss a tackle. Tackles nice and low  chopping guys down he has a pro tackling technique for sure. Anticipation is top of the line combined with his get off makes for a dangerously talented young LB prospect

His first step is up there with the top LB’s in the 2019 class if not all players.  That speed can come in handy if asked to cover more at the next level. Attacks the game with the intensity every coach and scout is looking for. Nothing he wouldn’t be able to pick up on whether 43 0r 34 he has the versatility to do either one. Can be a  Potential star on ST in the NFL with speed and sure tackling any ST coach would love to have.

Very interested in watching him break even more  records his SR campaign as he shows improvement every year.  Has Pro Bowl caliber potential and i do not say that about many prospects. .

Sure he is flying under the radar now but as the College season gets going watch Sutton show the Nation why his name is a name to watch . Whatever team is lucky enough to draft him could have a star for the next decade or more.