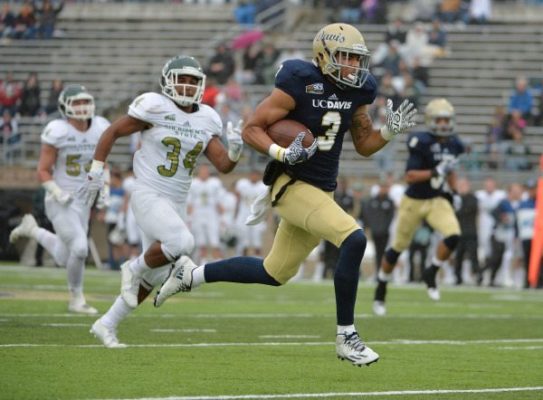 Keelan Doss of UC Davis is big physical wideout that will win the 50/50 ball battle.

Runs flawless routes has quick body movement works his way open or just out jumps the competition  with his awe inspiring grabs and his incredibly strong reliable hands. Can split the secondary with his athletic tough style, make the  big plays in tight coverage with his quick short area movements great handwork , perception along with tremendous timing. Great vertical can highpoint the ball out jumping defenders or just plain outclassing them. Size speed combo every OC is in search for. Long arms, amazing extension  too pluck balls out the air. Can also go down low to make the tough grab on underthrown passes or on come back routes.

His production exploded in 2017 and he will look to improve on his amazing JR season.  Plays with a Chip on his shoulder because Cal Davis was the only College to recruit him out of H.S.

Can play the sideline well with tested hands & rapid  footwork. This big WR can be moved all over the X, Y and Z positions. Can be a red zone nightmare with his size, long arms strong hands & laser focus. Can reposition his body go up with his beastly   frame and high point the ball. Out maneuver DB’s has a real good vertical game . Really quick in and out of breaks has the burst to get seperation. Turns on the jets with the ball in his hand has insane breakaway speed & can shake defenders with his agility movement skills to match.

Doss is already known in the scouting community but he will be known outside by fans as well come draft time.   If this is the first time you heard of Doss? Mark my words.. It won’t be the last. Check out highlights from @DraftDiamonds