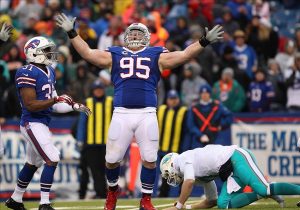 Bills heart and soul of the defense did not tear his ACL!

The Bills last preseason game against the Cleveland Browns was a rough one. While the Bills pulled away with a win, they lost two of their players to what looked like serious injuries.  Both A.J. McCarron the Bills recently signed free agent quarterback who was battling for a starting role in Buffalo and the heart of their defense Kyle Williams went down with injuries.

The Buffalo Bills quarterback suffered a hairline fracture in his collarbone Friday night against the Cleveland Browns. Coach Sean McDermott told reporters Sunday that McCarron will be evaluated again, and require further testing.

McDermott said defensive tackle Kyle Williams is “week-to-week” with a knee injury. The 35-year-old veteran also went down against the Browns on Friday. An MRI revealed he did not injure his ACL. This is great news for the Bills. Josh Allen and Nathan Peterman will fight it out to see who wins the starting quarterback position against the Ravens week 1, with McCarron likely out for several weeks.