Aaron Rodgers goes off about the Anthem; Says it was never about the Troops 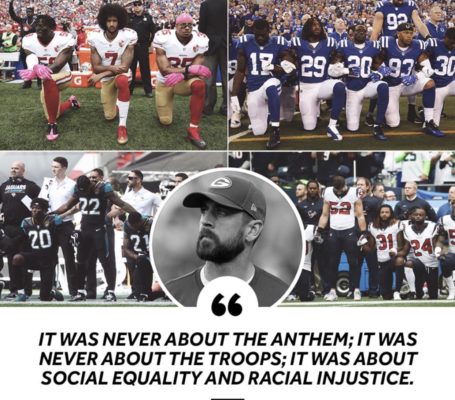 Aaron Rodgers the Packers Franchise Quarterback went off today when speaking about the National Anthem and Donald Trump. Rodgers is sick of people saying that the NFL players are protesting the military and he is also upset about the comments of Donald Trump.

This is what Aaron Rodgers told the media:

On people who consider NFL players who protest anti-military:

“I don’t know how many times we can say, as a player and as a group, how much we love and support and appreciate the troops, and the opportunities this country allows us. But this is about equality and something bigger than ourselves, and bringing people together, and love and connectedness and equality and social justice, and putting a light on people who deserve to have the attention for their causes and their difficult situations that they’re in. You know, people have their opinion — you shouldn’t do it during the anthem, you shouldn’t do it during this — that’s fine. But let’s not take away from what the real issue is.”

On the decision not to respond to statements by President Donald Trump and others critics: