Should Wide Receivers be getting paid the way they are? Check this information out

The NFL players around the league all want to get paid and while I agree you should get paid if you are good, I have a problem with the way some of these teams throw away money. I want to know if you think wide receivers are overpaid?

The other day the Los Angeles Rams gave wide receiver Brandin Cooks a five-year contract extension. Terms of the deal were not disclosed but the extension is worth $80 million, meaning he is the 19th player to be paid more than 10 million dollars a year to play the wide receiver position. While that is not many players making more than 10 million dollars annually, some of the money being dealt is insane.

I want you to take a look at this photo from our friends over at Over the Cap. 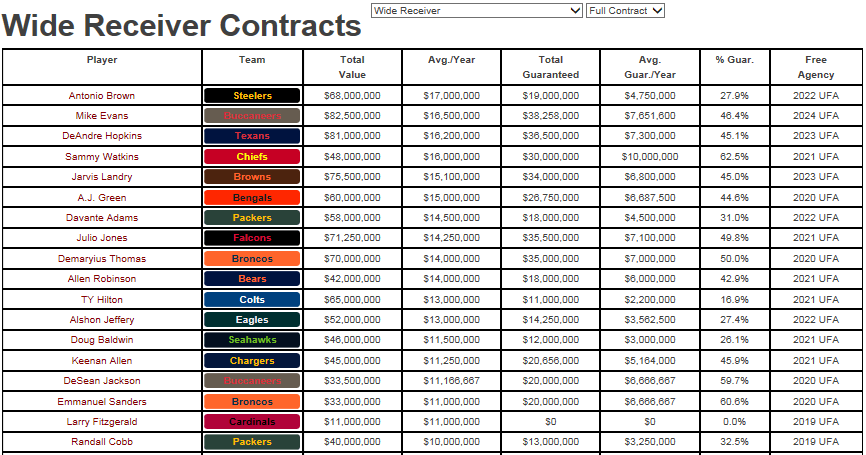 There are 18 players not including Brandin Cooks on this list, but out of those 18 players who are getting tons of papers, only 9 of them passed 1000 yards last season.  Mike Evans had 1,001 yards, which is damn near 999, but let’s talk about some of the other players getting paid.

Sammy Watkins who is getting bank, had a whopping 597 yards receiving last season for the Rams. Let me tell you too he was the 4th leading receiver of the Rams.  Robert Woods, Cooper Kupp, and Todd Gurley all had more receiving yards then he did.  He was given a monster contract by the Chiefs and while I love Sammy Watkins, I cannot justify that contract. Watkins has one career 1k yard season.  But let’s keep going.

Jarvis Landry who is a jack of all trades on the football field is going to be making 15.1 million a year roughly and last year he came close to eclipsing the 1k mark at 987. The Browns should be able to help him pass the mark, but that is still a ton of money for a non-1k yard receiver last season. He has two career 1000 yard seasons.

TY Hilton was banged up and played with some bum quarterbacks. He almost hit 1k last year registering 966 yards. I feel his pay can somewhat be justified because he does have four consecutive 1000 yard seasons before this last year playing with a ton of backups.

Demaryius Thomas and Emmanuel Sanders have a similar situation over the past two years with Trevor Siemian and every other bum quarterback that took snaps not named Peyton Manning. While Thomas has had five consecutive 1000 yard seasons, Sanders has only had three in 8 years.

The Packers have two wide receiver’s on the list making more than 10 million a year and neither one of them had 1,000 yards this year.  Davante Adams was close at 885, but Randall Cobb had 653 yards.  In seven years Cobb has 1 year going over 1000 yards.  Adams on the other hand has never eclipsed 1000 yards but is getting paid 14.6 million a year. That is INSANE!

Alshon Jeffrey helped the Eagles win a Super Bowl last year, but he only had 789 yards receiving. He has only broke 1k twice in his six year career.  That is not a good track record in my opinion. He is getting paid some money too.

Doug Baldwin was 9 yards short of hitting 1k this past season, but he two is getting some bank to play the position. he has eclipsed 1k twice in his career, and is getting 11.5 million a year.

The Bears gave Allen Robinson a ton of bank this past year and he had only 17 yards receiving. I know he was hurt but remember he only eclipsed 1k in his career once.  He has 2848 yards in his career, and is getting paid 14 million a season.

So when you hear guys like OBJ upset that they deserve to get paid like a top receiver you have to see their gripes. Beckham Jr has three years in a row going over 1000 yards and last year in 4 games he had 300 yards.  If I am going to pay you 10 million plus dollars a year, I need a bunch from you, and I would expect 1000 or close to a 1000 every year.

What do you expect from a wide receiver who is looking for 10 million a year? Should he be hitting 1,000 yards?  I want to know your honest opinion. Let us know on Facebook, Twitter and Instagram what you think!