Brandon Browner was in court today in his jumpsuit; Facing LIFE in Prison 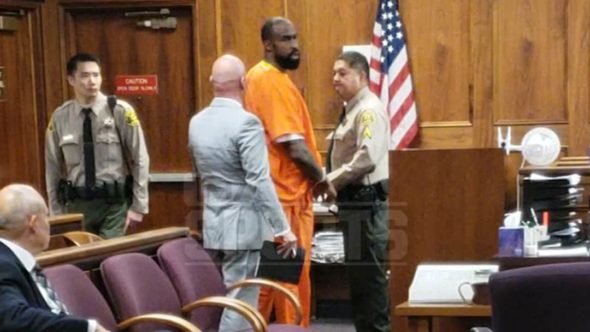 Brandon Browner the former Seahawks defensive back was in a different uniform today.  He showed up in an LA court room wearing a orange jumpsuit. He is facing up to LIFE in prison for attempted murder.

Browner a  6’4″, 220 pound Super Bowl champ walked into the courtroom in handcuffs, and didn’t say much during the hearing. He did plead not guilty to the attempted murder charge. These are the charges he is being hit with per TMZ Sports.

Browner has been hit with 1 count each of attempted murder, first-degree residential robbery, first-degree burglary, person present, and false imprisonment. He also faces two misdemeanor counts of cruelty to a child.

Officials say Browner broke into his former GF’s apartment in La Verne, CA on July 8 and allegedly chased the victim, dragged her and then smothered her in a carpet.

Her two children were present when the alleged abuse occurred.

Browner is accused of stealing the victim’s Rolex watch. He fled the residence but was later arrested.