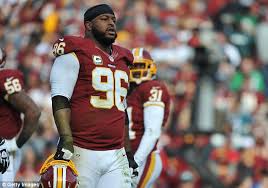 Barry Cofield, 34, was arrested on charges including possession of heroin, fleeing and eluding, and aggravated assault on a police officer. He was taken to Seminole County Jail and has since posted bond.

Cofield was drafted in the fourth round by the Giants in the 2006 NFL Draft and has also played for the Washington Redskins. He played college football at Northwestern University.

According to the report, Cofield sat in his Escalade at a light and would not drive.  When police went to his car window he was sleeping.  The officer tried to wake him up, and when he did Cofield took his foot off the brake and went on a high speed chase trying to out manuever the Police.  He sideswiped a car and then refused to open the door for police, who smashed out his window.  Cofield was taken to the ground and had two baggies of white powdery substance that tested positive for Heroin. Cofield was arrested for Aggravated Assault on a police officer, fleeing and eluding and possession of heroin.

Cofield, a Cleveland native, was drafted in 2006 by the Giants and played five seasons with the team and helped them win a Super Bowl, alos played for the Redskins for four years before returning to the Giants in 2015. He had 19.5 sacks in his nine-year career.