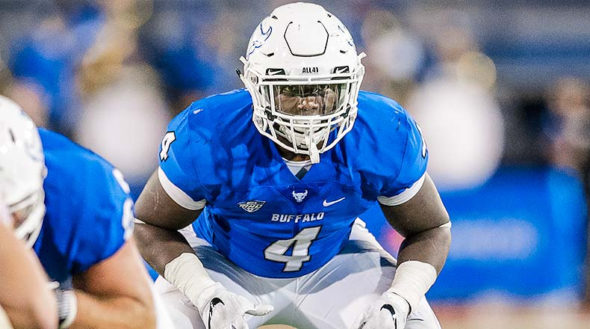 All Mac First team ( ILB). His 154 tackles ranked him 2nd in the entire nation.

2015- While at Junior College at City College of San Francisco he was a vital part in getting them to the state Championship 2015. Had 72 tackles along with a pair of picks.

Still early in the process  he has a full Senior year to turn heads.

Hodge jumped out to me, when i was scouting another Buffalo player.

Mid/late round gem with tons of upside.  Muscular frame with strong upper and lower body power . Nose for the ball can shoot gaps hunt QB’s & RB’s.  Tremendous in coverage for a big linebacker ,has amazing agility.

2nd in tackles in 2017 in the Nation. With a good Senior year this young man could be known by many scouts and NFL personal by the end of the College season.

Super aggressive could fit both 43 and 34 fronts. Vision to see plays develop, which is crucial for an Inside backer. Great first step, would imagine his 10 yard split should be good at his pro day.

He showed improvement every year from High School straight thru College.

Hopefully that continues in his Senior year into the NFL. Football IQ is top notch. Recognition of plays is outstanding as well as, a top tackler in all of CFB.

This report was completed by Matt Anzio our newest addition on NFL Draft Diamonds! Follow him on Twitter!