Three Quarterbacks to Watch for In The 2019 NFL Draft 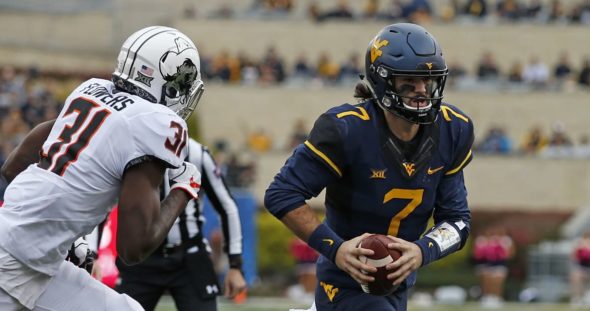 Three Quarterbacks to Watch for In The 2019 NFL Draft

The 2018 NFL Draft is in the books and it’s never too early to look ahead at the potential top 2019 NFL draft prospects. Especially when it comes to the Quarterbacks this year. The 2018 draft was loaded with elite signal callers. Will the 2019 Quarterback draft class produce similar talent? Three quarterbacks that I think can catch talent evaluators eyes are Will Grier from West Virginia, Trace McSorley from Penn State, and Drew Lock from Missouri.

Will Grier is an intriguing prospect with having the familiarity of playing under center at the University of Florida and then transferring to West Virginia in 2016. When looking at Grier’s film you could tell he has the arm strength to fit the ball into tight window’s and can have the ability to make plays on the ground with his feet. His awareness in the pocket got better each week as he started to get comfortable in Dana Holgorsen’s offense. Most of West Virginia’s offense is from the shotgun so Grier will have to work on his footwork when it’s time to make that transition from college to pro’s. With another year of football under his belt I expect Will Grier to make some big stride’s and help West Virginia have a successful season in the Big 12.

One of the most underappreciated players in college football is Trace McSorley. McSorley has led Penn State to back to back double digit wins the past two seasons. While also leading his team to two New Year’s Six Bowl games such as the Rose Bowl 2016 and the Fiesta Bowl 2017. He reminds me in some ways of Baker Mayfield due to the willingness of putting his team in the best situation to be successful. Trace doesn’t have elite arm strength, but he has good arm strength. His deep ball can hang at times, but I think it’s Trace’s ability to improvise and make throws outside the pocket while on the run is what makes him unique. McSorley is an accurate quarterback who can get the ball out in a hurry as well. The turnovers and protecting himself is something he will have to be more cautious with. Trace McSorley is a proven winner and should lead Penn State to yet another successful season before departing for the NFL.

Some talent evaluators already have Drew Lock as the number one quarterback off the board in the 2019 NFL Draft. Lock threw for an outstanding 44 passing touchdowns and only 13 interceptions a season ago. Drew love’s the deep ball and his arm strength pops out when you watch his film. Lock doesn’t have blazing speed like most dual threat quarterbacks, but his athleticism will surprise you especially in the run game. It’s going to be a big year for Lock and he will be playing for his third offensive coordinator this fall. That’s important to look at to see how his development will progress before the NFL. When faced with pressure you could tell Drew held onto the ball too long which resulted in turnovers. Even though Lock put up some impressive numbers in his junior season, I think it was smart for him to come back for his senior year and work on his game more. The intangibles are all there for Drew Lock to be an elite passer in the NFL.