Underappreciated Prospects Who Are Trending Upward 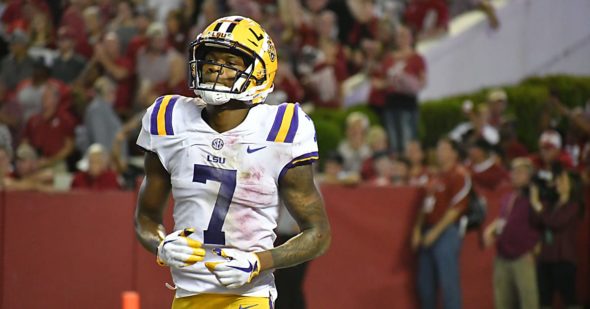 Underappreciated Prospects Who Are Trending Upward

Each and every year, you always hear about the top of the line prospects. The ones who are known as sure-handed first rounders. In the grand scheme of things, these first-round picks do not always pan out the way they should. It’s after the first round where you see talent hungry prospects that take the league by storm. Here are some underappreciated prospects that are trending upward.

D.J Chark out of LSU is tall, fast, and can get downfield in a hurry. Chark’s acceleration is smooth and sudden, making it hard for opposing defensive backs to run down the field with Chark. While watching Chark, everything seems so effortlessly. As you watch tape on Chark, he can run away from people with ease. Along with his vertical game, Chark can get across the middle of the field, making catches in traffic and being unbothered by hitters. Chark has the potential to be a WR2 for any team.

Shaquem Griffin out of The University of Central Florida, is a first round pick in my opinion. With Griffin, you will get a guy with a motor like no other. He was unblockable in college, earning American Athletic Defensive Player of the Year his junior season. His athletic ability is off the charts, to go along with his high football I.Q., making his teammates better around him. When given a game plan, Shaquem studies it, processes it, and executes it, making him appealing to many organizations. Griffin clocked in at a 4.38 40-yard dash, which is very impressive for an outside linebacker. I see Griffin as a hybrid outside linebacker in the league for years to come. Whoever drafts Shaquem Griffin will be one lucky organization.

A tall and rangy quarterback, Luke Falk uses his height to his advantage. Having length, Falk stands in the pocket, providing great pocket presence through each drop back. Seeing over his offensive line has never been an issue for Falk. Every NFL organization looks for a quarterback with a quick release, Falk possesses that trait. See’s the field well, going through progressions from sideline to sideline. Falk is a gifted deep ball outside breaking route thrower. Always on time when going through the route tree. Takes advantage of one-on-one coverage, throwing accurate fade routes as well as back-shoulder throws. Tends to look off the high safety, which can open up passing lanes down the field. Most of Falk’s balls are well thrown, providing his receivers to have an opportunity to catch the ball. Falk will need time to develop, but do not be surprised if he turns out to be this year’s, Dak Prescott.