Another season has come and gone, and surprise, surprise, the New England Patriots, were in the super bowl again. Despite, there loss to the eventual champs (Philadelphia Eagles), the fact that the Patriots were back, and continue to stay both relevant and dominant in the NFL, is amazing in itself. In the NFL (Not for long) league, it is tough to stay on top, something that has only been perfected by one team (Patriots). Although the Patriot brass decided to go heavy into the trade and free agent market to help build this year super bowl contender, they are usually one to build in the draft. Homegrown talent is usually the best way to do things, and the Pats’ have done this well. By staying on their own course, and continuously being the team, that other franchises try its hand at copying.

This might of been the hardest article I have ever written. Not for the actual writing, but for the fact that it is so hard to guess what Headman Bill Belichick, is up too. What type of players he is interested in, as it always seems to change, year to year. Even with all that, we decided to take a stab at a few offensive players that could interest the Patriot’s brass, and help replenish their pool of talent. 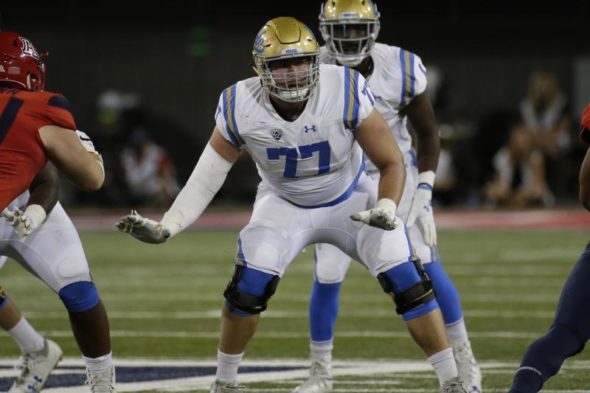 1) OT Kolton Miller (UCLA)- Watching the tape on Miller, it is easy to see why this would be a perfect fit for the Patriots. Other than being a sort of Nate Solder, clone, Miller has the nastiness to his playing style, that Belichick loves his guys. He is a big prospect at 6’8 310 LB’s, but moves very well, in both aspects of the offense (Run and Pass). With good speed, to get out in front of a runner, he can absolutely punish defenders. He has the long arms prospects need, to keep defenders off of there body, and help set the tone in the passing game. With all the loss the Patriots have had on the offensive line, Miller would be a great first step, in protecting the ageless one (Tom Brady).

2) RB Martez Carter (Grambling)- Carter may not be a household name (just yet), but please do not be fooled, by his small school status, the kid can play. With probably the best lower center of gravity, of any runner in this years draft, Carter has the skill set, to be a home run on any play. He is short (5’9), but has a thick base, that helps with his cuts and jumpstep. Also helps him with taking contact, against larger players, and winning at the point of contact. One of the big weapons over the last couple years (for the Patriots), has been RB Dion Lewis, and with the team in danger of losing him (via free agency), the Grambling star could be a great replacement.

3) OT/OG Brandon Parker (North Carolina A&T)- Solidifying their offensive line, should be right at the top of any NFL teams to-do list, the great Pats’ are no different. If you are going to have a 40-plus-year-old QB, you should keep him relatively clean, and safe. Parker is a big man (6’7 310), with a very high ceiling. He has a great first step, in the passing game, and the length to keep his body clean from defenders. Good natural strength, and although he could probably add more weight, and get stronger, can stonewall defensive linemen in the run game. The North Carolina A&T, alum has the potential to be a 10-year starter, and pro-bowler at the next level, and would serve the Patriots, at both the tackle and guard spots.