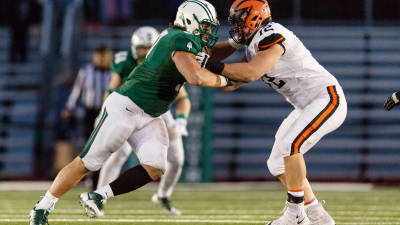 Q: What’s your height and weight

Q: What school did you attend

Q: Who would you say you mold your game after

A: I try to mold my game after Michael Strahan. He was my favorite player growing up, and he did it all. Rushing the passer and stopping the run game

Q: Would you call yourself an all-around player at your position

A: Yes I would, I can rush the passer as well as defend the run. I played linebacker all the way until junior year of high school so I believe those skills I learned a lot from the linebacker position, which helps me do some things other defensive linemen can’t do.

Q: Who was your favorite NFL team growing up

A: I would say New York Giants but I would also root for the New York Jets

Q: What is your most memorable experience during your college career.

A: Outside of winning an Ivy League Championship in 2015 I would say it’s definitely coming back from being down 21-0 to beat Yale for the homecoming game this year in front of a packed crowd. It was the biggest comeback in Dartmouth history

Q: Who was the hardest player you ever lined up against

A: Probably Max Rich, The tackle from Harvard and in high school I would say probably Jabrill Peppers in a scrimmage.

Q: What was your biggest adversity and how did you overcome it

A: My biggest adversity football-wise was going to 15 different camps before my senior year of high school and not receiving one offer to any of the schools. It ended up being a positive because I didn’t end up going to Dartmouth’s camp, and they were the only school that did offer me.

Q: What would you say is the highlight of your career

A: Getting a sack at Princeton in front of about 50 of my closest friends and family members in Jersey has to be one of the top moments I’ll never forget 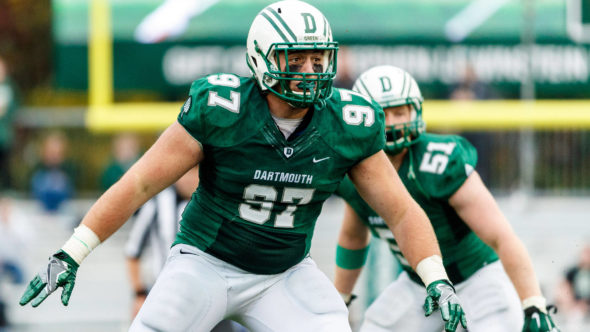 Q: What are your goals in life. Not just football but off the field.

A: Hope to play football as long as possible, then find a job that I love till I decide to retire.

Q: Who was the best teammate you had in college

A: That would be hard cause all my teammates have been great. But probably my roommate Eric Meile. As a linebacker, he was never afraid to throw his body around and go head to head with a 300-pound linemen. He also always did a great job of calling out the defensive plays and making sure everyone was lined up correctly

Q: What did you major in during college

A: I majored in Government

Q: What do you like to do away from football in your personal time.