Coming into the 2018 league year, the defending super bowl champions, Philadelphia Eagles, doesn’t seem to have many holes on their roster. Considered one of (if not the deepest) rosters, in the NFL, the head man in charge, Howie Roseman, seemed to of put together a stable of talent, which would come into play, early and often in 2017. Fast forward to now, and the birds’ seem to be in another great position, despite having a lack of cap space. Currently, the Eagles, look to bring back 20 of the 22 starters, from last year (19 if you count CB Patrick Robinson). As the draft quickly approaches Howie and company, have their hands full looking to add young talent, to surround there franchise (QB Carson Wentz). This year’s draft is stocked with potential talent, and if done correctly, could have the Eagles, playing NFL darlings again this year. With all that said, here is another shot at mocking a few players that could interest the champs.

RD 1) S Ronnie Harrison (Alabama)- Despite standing at 6’2 207 LB’s, Harrison, has understandably played second fiddle, to fellow Alabama DB Minkah Fitzpatrick. Forget all of that, when you watch the tape, you see the potential Harrison brings to the table. Tough against the run, he has a nasty style of play, that coach Jim Schwartz, covets in his players. He is also solid in coverage and would be a solid fit in the Eagles defense, as he could play both safety spots, and some spot corner. The young playmaker may be considered the sidekick, coming into this years draft, but if used correctly could become a star at the next level. 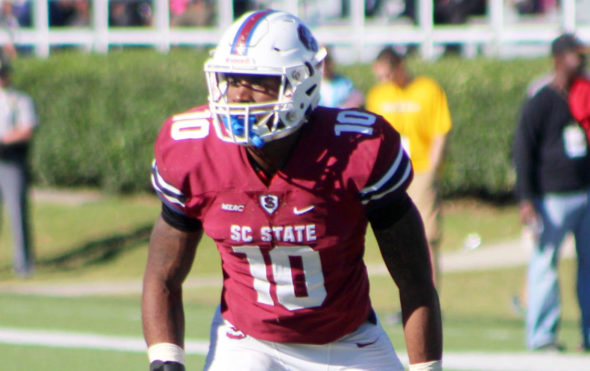 RD 4) LB Darius Leonard (South Carolina State)- Leonard may not be a household name (Just Yet), to most fans. But do not be fooled, he is the real deal. At 6’2 230 LB’s, the South Carolina State, product, has all the tools to be a difference maker. He has the pure speed to play sideline to sideline, and the football smarts, that helps keep him in position, to make a play. Solid in both the run and pass game, Leonard, could serve as a solid depth player, whom could eventually become a pro-bowl caliber, player for years to come.

RD 4) TE Dalton Schultz (Stanford)- Finally, in the fourth round the Eagles, land a new weapon for there young QB. The teams brass and coaching staff seem excited about UDFA TE Billy Brown, in their offense. But adding another TE via, the draft, would be the right move. Enter Schultz, the Stanford prospect, plays a lot like the current eagle, and former Cardinal TE Zach Ertz. Solid in the blocking game, he would serve himself well, in the run game. While also adding a talented pass catcher in the passing game. Wentz would be in offensive heaven if the young player reaches his potential.

RD 5) OT/OG Brandon Parker (North Carolina A&T)- What may have been considered something of a surprise, was just how good the Eagles offensive line played last season. Going into the 2018 year, the birds’ look to be just as good, as they bring back the entire core of players. Despite the success, it would behoove the birds’ front office, to add youth. Parker, is a big bodied (6’7 310 LB), monster, that has the tools to play both guard and tackle. Adding a talent like Parker would go a long way in ensuring the protection, of Carson Wentz.

RD 6) WR Jaleel Scott (New Mexico State)- The Eagles wideouts played at another level, last year. Even with all the talent, they house, when looking at the roster, you see a future need quickly approaching the front office. Adding the 6’4 215 LB, playmaker would be a huge step in the right direction. Able to play inside and out, in an offense, Scott, would be a sure steal for the birds’, while also helping in the special teams game. With great size and pure speed, Scott has the look of a true number one WR.

RD 7) DE Kemoko Turay (Rutgers)- At 6’4 260 LB’s, Turay certainly looks the part, of an NFL, pass rusher. When you watch the game film on him, you see a player who could be an absolute steal for a team. A complete monster coming off the edge, Turay, has all the tools, to be a difference maker. With the right coaching, he could be another wave of talent, added to an already stellar front line. There are a lot of question marks after 2nd year DE Derek Barnett, going forward (Mostly age when talking about other players), and the Rutgers product could be an answer.