When you say Green Bay Packers, you think Aaron Rodgers, and this year, when you think Aaron Rodgers, you think injured. That pretty much sums up the season, for Coach Mike McCarthy, and company. Seemingly well on their way to another playoff appearance, the team was drastically derailed, when Rodgers, went down with another broken collarbone. After that, things went downhill. In the NFL, losing a player, especially your best player, doesn’t necessarily mean, your season is over (See the Philadelphia Eagles), but what it does do, is force you to prove your team’s depth. It took about two quarters, to show just how needing of talent, the Green Bay Packers are. Still fighting the good fight, back up QB Brett Hundley, just didn’t have the magic (That Aaron Rodgers has), to get the best out of his surrounding cast. The truth was a soar site in Wisconsin, the Green Bay Packers, are not a very good football team.

With that said, we decided to create a mock draft, that could give an idea of players, whom could come in and help build up, their depth of talent. 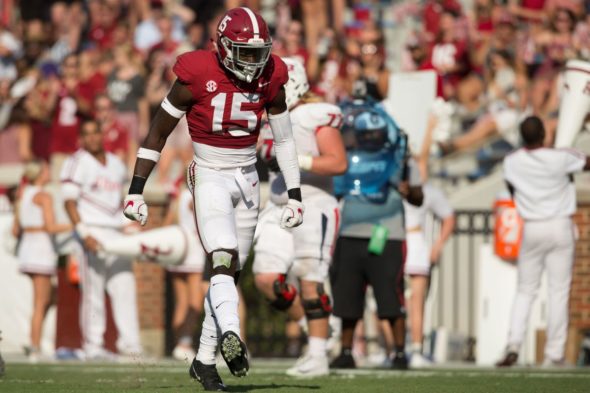 RD 1) S Ronnie Harrison ( Alabama)- The Packers, house some talented players on defense, but for some reason, they can’t seem to get it together. Despite investing deeply in there secondary, it always seems to be the soft spot on the field. On a good note, they took a positive step in adding CB Kevin King, last year via the draft. And this year, they will take a bigger step by adding this playmaking Safety. Harrison is a big prospect (6’3 216), that hits like a middle linebacker, and runs like a corner. He has smooth hips and has the tools to play multiple positions on the field. The Packers, need help at all three levels, and starting it off by grabbing a ball hawk, at center field, would be a good move.

RD 2) OLB/DE Sam Hubbard ( Ohio State)- When adding talent these days, versatility is the key. Considered a soft spot on their defense, Sam Hubbard, would be a good addition to there front seven. Able to rush the quarterback, on third downs, solid against the run, and has the thick lower base, that helps in setting the edge. He is capable of putting his hand in the dirt and has the potential to help in coverage.

RD 3) WR Auden Tate (Florida State)- Wide-out isn’t a big need for the Packers, but it could be, if all-pro WR Jordy Nelson, leaves. Even he stays, the team could use another red zone threat, and the 6’5 Tate fits the bill. Built solid, and thick bodied, Tate, may have had a down year in 2017 but has the tools to be a star at the next level. More then just a one trick pony, the big receiver is capable of going up and getting contested passes. Able to play inside and out, he runs clean routes and is a threat to score from anywhere on the field. Adding a talent like Tate, could go a long way in replacing Nelson, and giving QB Rodgers, another weapon to play with.

RD 4) TE Dallas Goedert (South Dakota State)- Perhaps the biggest need, coming into this offseason. We just decided to wait until the 4th round to pull the trigger. But please don’t be fooled, Dallas Goedert is a legit baller. He has good size (6’4 255 LB’s), and run’s very clean routes, while also having the necessary speed to create separation. The sure-handed tight end needs some help with his blocking, but nothing a good coach couldn’t help. With Aaron Rodgers, running the offense, Goedert, could become a top 5 TE, within a year or two.

RD 5) OG Wyatt Teller (Virginia Tech)- 6’5 308 pounds, of pure raw ability. Quick feet, a solid punch at the point of contact, and a road grader at times, while also having the balance to help in pass protection. The Packers, need help in the middle of there offense, Teller would be a good step in the right direction.

RD 6) CB Brandon Facyson (Virginia Tech)- Staying with the Hokies, the Packers would do well adding a talent like Facyson, this late in the draft. But do to the depth of talent at every position this year, a prospect like him could very well fall to the back end. He has great size to play on the outside, at 6’1 207 LB’s, and has the talent to play in press man, and zone man. Adding Facyson, to an already young talented core of corners, could go a long way, in making their defensive backfield a legit strength.

RD 7) DT Greg Gilmore (LSU)- Like I stated earlier, the Packers need help at all three levels of there defense. Gilmore has the talent to play across the line and would add solid depth while possessing the talent to do a bit of spot starting. He is solid against the run, and a terror in the passing game, when paying up to his potential.

RD 7) C/OG Frank Ragnow (Arkansas)- Adding depth up front, should be every NFL teams plan. Ragnow can play all three spots in the middle of the offense, plus a bit of Tackle. Despite, landing him this late, Ragnow has the look of a starting Center at the next level, with his solid footing, thick base, and quick feet to help in the passing game.