NFL Draft: 3 Running Backs the Detroit Lions should keep an eye on

It has been a long time, since the Detroit Lions, have had talent in their backfield, that scared opposing defenses. Gone are the days, of teams stacking the box, in hopes to shut down, Hall-of-fame RB Barry Sanders. Truth is, the Detroit Lions, have one of the best quarterbacks in the NFL (Matthew Stafford), and with him back there, they will always have a formidable passing game. But it is their lack of a true workhorse, that keeps there offense from being dominant, as teams have no respect, for their run game. Good news is, it is a new year, there QB is still young enough to be a legit contender , they have a good passing game, and an offensive line that is a piece or two away from being considered a top 5 core. Even better news is this year’s draft is loaded with running back talent, far beyond the likes of all-American Saquon Barkley.

When you study the prospects in this years draft, you see a stack of runners, who have the potential to be stars at the next level. Here is a look at 3 runners, that could be day one helpers, to an offense in desperate need of a home run hitter. 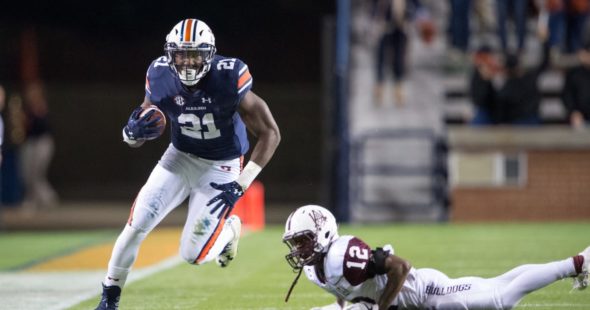 1) Sony Michel (Georgia)- I am part of the small group of the draft analysts, who believe that not only is Michel the better of the two (Nick Chub), for the Bulldogs, but has the potential to be the best runner in the entire draft (Barkley included). I get it, I am crazy, Barkley is a star, I understand and I agree. Michel, on the other hand is lighting in a bottle, that has the capability of taking over a game, and scoring from anywhere, anyway on the field. When watching the tape, you see a little bit of Rookies (Alvin Kamara, Dalvin cook, and Kareem Hunt), and the raw strength to dominate defenses. He plays so much bigger than his 5’11 216 LB frame suggests, as he is thick bodied, sort of like a taller Darren Sproles, and has the power to stay between the tackles, forcing defenders to miss all game. What makes him so special is his capability to create at the second level. He can make people miss, while adding a threat to the passing game, and best of all, because of the runner by committee he played in at Georgia, he doesn’t have a lot of wear on his body. The addition of Michel would give the Lions offense, a whole new level of threat to scare defenses.

2) Kerryon Johnson (Auburn)- When watching the tape on Johnson, you can’t help but see a little bit of Pittsburgh’s RB Le’veon Bell. Extremely patient, when finding a lane to run in, he has a sort of start and stop capability, that drive a defense crazy. Built to be an every down back (6’0 215), Johnson has the strength to take over on all three downs. He has excellent vision, and understands what it takes to let a play develop. His biggest strength is his ability to shift from power, to speed in a blink, as he lowers his shoulder’s between the tackles and has the breakaway speed to turn a crease into 6. With a player like Johnson, the Lion’s would have another weapon, that could play all three downs, as his blocking is solid, his hands are strong, and he is the playmaker Detroit fans have been pining for since the G.O.A.T (Sanders).

3) Rashaad Penny (San Diego State)- In the great words, of SideLion.Report’s  Star writer, Tredell Suber (@OlSube) “That boy is bad!….That boy is all kinds of bad!” The perfect way to describe the San Diego State, superstar, Penny. He isn’t the biggest (5’10 224) he isn’t the fastest (4.59 40), but he has that “IT” factor, scouts talk about when describing a rising star. He does everything well, catch passes out of the backfield, line up on the outside to create matchup problems, get dirty in between the tackles, and use angles to create space and hit the big run. Overshadowed last year, because of another stud Donnell Pumphrey, Penny finally has his chance to be the guy, and he did not disappoint. I am not one to get caught up in numbers, but when you see a player rush for over 2,200 yards, you can’t help but freak out a little. Put on the tape, and watch the kid run, you will see the future of some lucky team. He is clean off the field, and a true on it, as well as the locker room. If the Lions were to land Penny, we could see a huge boost, as Penny has the potential to be an all-pro at the next level.