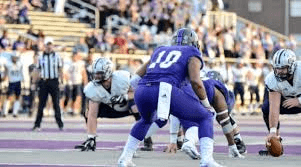 Background: A Bassfield, MS native.  Played his freshman & sophomore seasons at Mississippi Gulf Coast Community College (JUCO) in 2014 & 2015.  In 2015, he recorded 95 tackles, four tackles for loss, and two sacks.  In 2016 as a junior after transferring to Central Arkansas, he recorded 49 tackles, 4.5 tackles for loss, one pass deflection, and one fumble recovery.  In 2017 as a senior, he earned Honorable Mention All-Southland Conference honors & CoSIDA Academic All-District team honors while recording 70 tackles, five tackles for loss, 0.5 sacks, and one pass deflection.  He was invited & participated to play in the 2017 FCS Bowl.

Strengths: Graves is a linebacker with a pretty solid build for his size.  He shows good instincts and can find the ball on most plays.  His athletic ability allows him to be able to take decent pursuit angles to get to the ball carrier.  Against inside runs, he can move through traffic, square up the ball carrier, and fill the gap to bring him down.  Against outside runs, he can move laterally at a decent rate to get to the running back.  In pass situations, he shows good ability to be able to spy the QB, and shut him down before he can gain a large amount of yards.  He has the ability to cover the running back coming out of the backfield in man coverage.  He shows decent skills to play zone coverage.  He has some ability to be able to rush the QB from the outside., or from up the middle.  When he tackles the ball carrier, he looks to wrap him up instead of going for the big hit.  He shows the ability to line up & make tackles on special teams.

Weaknesses: Graves is slightly undersized for an inside linebacker in most schemes.  While he can move, he seems to play stiff with very little flexibility.  He has a very hesitant first step, which limits his explosiveness when rushing the passer or attacking the ball.  When dropping back into pass coverage, he tends to drop step more times than not.  Cut blocks & bigger offensive linemen limit his ability to get to the ball carrier at a faster rate.

Summary: Graves was a two-year starter for the Central Arkansas Bears in 2016 & 2017 as an inside linebacker, which earned him an invite to participate in the 2017 FCS Bowl.  He is an inside linebacker who plays with good instincts & decent athletic ability despite looking stiff on film.  While he can shed blocks to get to the ball at decent angles against inside & outside runs, cut blocks & larger offensive linemen can slow down his closing speed.  Against the pass, he can spy the QB, play decent zone coverage, and cover running backs coming out of the backfield, but needs to work on not drop stepping when backpedaling into coverage.  To play at the next level, he needs to show that he can be more explosive when rushing the QB, and when tackling.  Overall, Graves was a pretty productive player at the FCS level, which should give him some consideration as a priority free agent after the draft.  He has the traits to play special teams as he develops his skills as an inside linebacker.