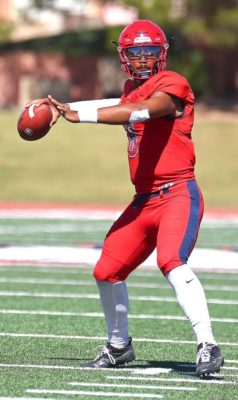 I would say I have admired a lot of men I felt carried themselves in the best possible way they could in a inspiring, productive and professional manner through my life. But now I would say Andre Ward. He is from the Bay Area like myself so I have seen him with a closer eye than most of the boxing world. He’s a fighter and is strong in his faith and his abilities in the most inspirational way to me. He is humble and confident but not cocky. He is precise with his craft and also his words because I believe he is pure in his approach to his role as a public figure in knowing how much impact he has on people. Me being a QB and desiring to lead a large group of men and even though he is a boxer and is a one man sport he does a great job of giving his team praise especially his trainer and I can still relate to that. He is an extremely hard worker and is selfless. I respect that a lot.

My favorite teacher had to be a professor my Junior year Oona Hatton at San Jose State. She helped me believe in myself and taught me so much with what I wanted to do with my minor which was acting in her acting classes and helped me overcome so many challenges in striving to become a better young man, student and QB. Yes, her help definitely translated in my athletic career as well. I honestly do not think I could thank her enough.

That is a hard question because I have faced a whole lot of great players throughout my football career. I played against Austin Hooper and he actually sprained my big toe from a sack in the 3rd round of the playoffs my senior year. He was a great player & De La Salle’s defense was stacked but I’d have to say Marcus Peters who played at McClymonds. I played against him my junior year in high school he was a fantastic competitor and it’s no surprise that he’s the best CB in the NFL now. 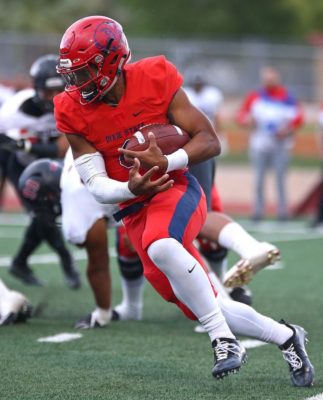 There are so many. I do not want to just name one but I have honestly been amazed week in and week out by our safety Trayvon Watson. He has the size, ball skills, cover skills and football IQ than any safety I’ve played with or have known over the years. I feel like his first year this year will definitely bring more eyes for him next year which will be his senior year. He ignited our defense along with Tyneil Cooper, Mike Jones, Jaylen Moore along with other solid DB’s we had that had us as the one of the top pass defenses in the country.

“God’s got a Blessing” by Norman Hutchins

I would say Matthew Stafford. I would like to think my arm strength and accuracy is comparable. Even though he is a side arm magician a lot of the times, I would not say that falls into my personal mechanics. However, I do believe our size and physical tools are similar. We are athletic but not known runners or scramblers but usually make plays within the pocket mostly, but definitely can make something happen on the run as well. I know I have been blessed to have had excellent coaches and mentors over the years to teach me the game the right way, so I do believe my football IQ is substantial as well. I still have so much to learn and get better at physically and mentally but I know I could definitely play in an offense such as Detroit’s comparing Stafford to myself.

Honestly, it might have started with my exit from SJSU. Not getting the starting job my junior year & I believed I was the best guy we had but still respected the coaches decision at the end of the day. It was hard knowing I could play at the Division 1 level. And then had to transfer elsewhere to essentially prove myself. Was blessed to start receiving offers to play elsewhere. However, when I got to a place I did not really know how to play with a shoulder injury at the time. So I decided to take the 2016 off to see if I needed surgery or just rehab it. Fortunately, not realizing it was not as bad as I thought I actually didn’t need surgery. But when I found that out I still could’ve played that year I was already back in California and seasons had started. Fortunately, I still had the opportunity to play another year only for D2 the next year. Went through the toughest month from August to September as I was homeless for a month sleeping in my car around the city of San Jose. Finally got a sales job and found a cheap apartment. My relationship with the Lord definitely got stronger throughout that whole thing and I have been extremely thankful for His grace ever since. It could’ve been a lot worse than that. Subsequently, my hunger for this game exceed x10. My love for this game had never wavered but seeing myself at the lowest I have ever experienced made me so grateful and on fire to get another opportunity. Which was to finish out my senior year this year at Dixie State. I was blessed to get the opportunity and finally got to Utah and worked really hard to maximize the opportunity. Furthermore, the rest of the year was an amazing experience and now have the genuine opportunity to play in this well respected bowl game.

I always love to get to the training room before everyone else so I can warm up my body the best way I can. Always go onto the field and find my safe spot from the inspired ritual Russell Wilson, as I find that spot I usually gather my thoughts and align them with what I need to do that day to be successful so during the game I can go to the spot to stay even keel and focused on the goal my team and I have that game.

Actually I have so many from my actual college career but I have to say the most crazy game winning play came my sophomore year in Junior college when I was at Contra Costa (Richmond, CA) when we played Sacramento City. We had decided to go for it on the goal line to win the game instead of tie it and we called a draw because we had already passed it for 360+ that day so we felt they would expect the pass. I get the ball (fake the pass & hand it to Devante Lynch, Marshawn Lynch’s younger brother) the whole defense rushed in the backfield and stopped him and he had the wherewithal to stay up, look back to me, pitch it back and I get on my horse towards the right side of the field thinking I’d have to run it but then right before I get close to the line of scrimmage my WR comes open as he was sprinting with me and I fire it to him for the game winning TD. Craziest play I have ever been a part of.

I was in a communication class that concentrated in homelessness. I volunteered to speak in front of about 80-100 of the homeless at the shelter in Downtown San Jose and told them that our class was putting on a show to help spread the awareness for the homeless. I participated in a role in that play and then we helped volunteer to feed and helped find jobs for them. After that class I kept doing that for another a little part of the rest of that year and it was a huge blessing. Developed some unique relationships with some of those people. Having personally getting a taste of the unfortunate aspects of not having a place the very next year has even opened my eyes more to even the slightest of what they go through. I have gained a huge heart for the homeless and want to be apart of a community outreach for such moving forward.

I had a lot because I admired a lot of QB’s but I’d have to say growing up I was the biggest Steve Young fan, read his book, and have always loved wearing #8, I always wanted to be a 49er growing up. Then came Michael Vick & Donovan McNabb and loved them both.