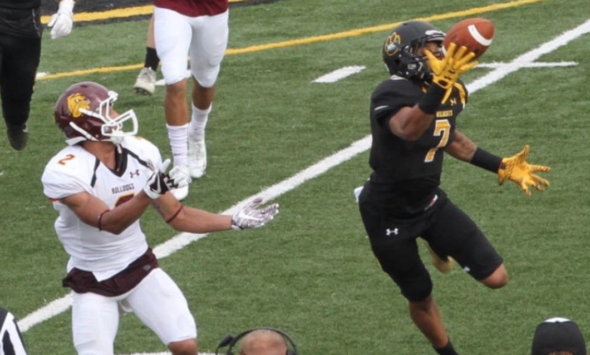 Background: A native of Kansas City, MO. Started in seven games for Chabot College in 2015. Started in five games out of nine at strong safety as a junior in 2016 after transferring to Wayne State. Started in 10 games out of 11 in 2017.

Strengths: Harris has the height of an NFL safety with the body frame to add weight. He has good arm length, and his okay feet & hips make up his athletic ability. He is a versatile player that can line up as a free safety, strong safety, nickel/slot corner, and as a gunner on kickoffs & punts. Harris is a physical, wrap-up tackler at the line of scrimmage, and in the open field. He shows good awareness in zone coverage as a free safety, along with good range & ball reaction as an over-the-top defender. As a nickel/slot corner, he shows the ability to cover the slot receiver in man coverage. Is very good at diagnosing short passes & screens.

Weaknesses: On film, Harris looks to play with average speed for a defensive back, and seems to be stiff in his backpedal. He tends to drop step at times when he breaks on the ball to make a play. He tends to be undisciplined against play-action passes. His ability to be productive on a consistent basis at one position will be questioned, and he didn’t play against top level competition at the Division II level.

Summary: In his two year career as a Wayne State College Wildcat, Harris recorded 64 tackles, 10 interceptions, and 9 pass breakups. In 2017, he recorded 34 tackles and eight interceptions, which tied Wayne State’s single season record, and led the nation in all of Division II, and was a 1st team All-NSIC selection. Three of his eight interceptions occurred in one game, which tied a school single game record. Harris is a versatile athlete that can play in multiple positions in the secondary, and on special teams. He can make wrap-up tackles anywhere on the field, play zone coverage as an over the top free safety, cover the slot receiver as a nickel/slot corner, and can stop short passes & screens for little to no yards. His play speed, feet, and discipline against play-action passes will need to improve as he transitions to the next level. Consistent production at one position, especially against a higher level of competition will be key for him as well. A strong showing in an all-star game, combine, and pro day within the upcoming months will only help his draft stock. I see him making an NFL roster on special teams while he develops his skillset as a free safety.