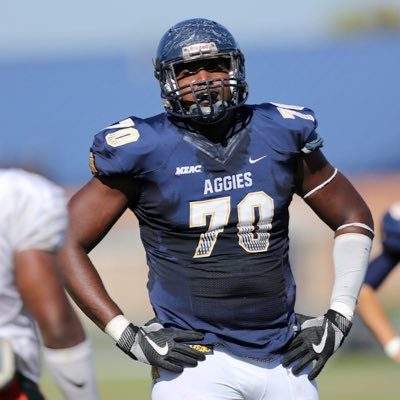 Being an offensive lineman is a tough job at any level.  But when you look at the performance of Brandon Parker the massive offensive lineman from North Carolina A&T, you will be amazed at how easy he makes it look.

The 6’7, 300 pound tackle is a machine. He throws guys like rag dolls and NFL scouts are taking notice.  Parker blocked for Tarik Cohen who was drafted in the fourth round by the Chicago Bears earlier this year.  This guy has been opening holes his entire career, and he will be opening holes for running backs at the next level very soon.  Check out our interview with a small school hero:

To stay healthy and dominate and leave no doubt of how good of a player I am, and win a championship in the process.

In pass rush, Kenneth Melton, but Julian McKnight is the toughest in the run.

Jeremy Taylor, had a breakout year last year, but never got the recognition he deserved.

When we played Hampton, last year, in 2016, and I drove a guy about 8 yards and planted him in the open field.

I am active in my church, and we set up a table downtown to feed the homeless of Greensboro, it was pretty cool to spend time and give back to the community.

I wasn’t able to pick my current number coming in, I would have chosen #72 in honor of my Dad, but my teammate already had it.

I am a God fearing young man with endless potential and will outwork anyone. I understand I’m coming from a smaller school so I have no fear of competing with bigger talent and proving myself to be dominant