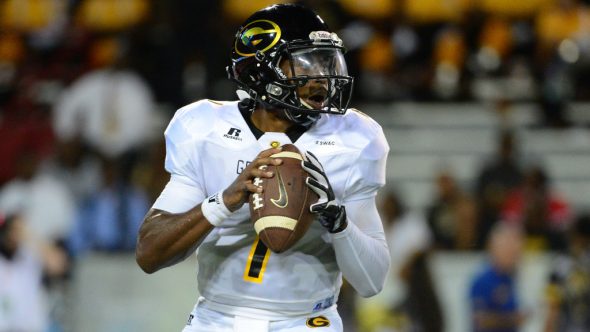 DeVante Kincade signed with Ole Miss from Skyline High School in Dallas in 2013 as a top tier dual-threat quarterback, according to 247Sports’.

The redshirt sophomore transferred from Ole Miss to Grambling State in an effort to be closer to his mother, Latonya Boyd, who lives in the Dallas area. She suffered a stroke, has battled blood clots in her legs, and has had an aneurysm. Kincade, a true leader himself wanted to get closer to home to be near his mother.  He was constantly driving 16 hours to get home from Ole Miss, and decided to leave for Grambling State which was only 9 hours from home.

Not many players would chose an HBCU school over a team like Houston, but Kincade wanted to prove that he was a leader and could win, and that is exactly what he did. Kincade and the Tigers went 12-1 and won the HBCU National Championship. The Tigers will look to defend their SWAC and HBCU national titles in 2017, but before that happens we interviewed the small school hero himself.

Be the best leader I can be and control the game . Stay ahead of the sticks

I’m focusing on accuracy, ball placement and timing on all my throws and dominating the game

Helped the first Southern Jaguar Mascot up the stairs so she was able to eat.

After my brother passed in October of 2015 number, I wore #1

I will be the most dedicated player on the team and will represent the organization with pride. and I will be a counted leader of the team.