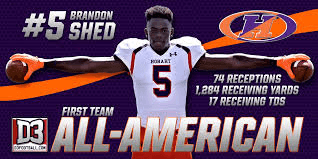 Brandon Shed is a Division 3 prospect you better prepare for. He is not a push over, to be honest he should be on a D1 team somewhere. How he ended up at a Division 3 school blows my mind, but Hobart the school of Ali Marpet was able to see something in the 6’4 wide receiver that every other college in the country didn’t.

Shed is new to his position but he has blossomed to one of the best wide receivers in all of college football.  The West Palm Beach native took his talents to New York, and it has paid off dividends.  He enters his final year with 27 receiving touchdowns and over 2200 yards receiving.  His numbers continue to grow, and I expect him to have a monstrous season this year.

Hobart shocked the world when Ali Marpet was drafted making him the highest D3 player ever drafted, by the Tampa Bay Buccaneers, but do not be shocked again.  Brandon Shed has the ability to play at the next level. I would not be surprised to see Shed’s name called as well.  Here is our pre-season draft interview with a small school hero:

To win a national championship

To focus more on the little things like getting to the right route depth etc.

I have to say Tommy D’Antonio! He’s a tough guy. Never takes a play off even in walkthroughs

John John our Left Tackle. I never seen a guy lay people out the way he does.

My one had catch against SLU my sophomore year

They gave it to me

I’m a hard worker. Still learning how to play this position so the sky is the limit once I master my position.